Share All sharing options for: Tampa Bay Buccaneers, Beyond The Box Score

Anyone can get a picture of a team by looking up the box score of a game, but I watched every play of the Tampa Bay Buccaneers-Carolina Panthers game to try to get a better feel of the New York Giants’ upcoming opponent. Here are some observations you can't get from the box score.

First, how disappointed do the Buccaneers players feel? There was an absolutely pitiful showing from the fans. There were way too many empty seats in Tampa Bay on opening day, even with an exciting young player like Cam Newton in town. Pity.

The Buccaneers got off to a fast start against the Carolina Panthers entering half time with a 13-0 lead, but the Bucs only scored three points in the second half.

Here are some important box-score numbers.

The Buccaneers sacked Cam Newton three times on Sunday and had two interceptions. The Buccaneers dominated the time of possession holding the ball for 37 minutes and 27 seconds, but only averaged 4.2 yards per play on offense. The Buccaneers averaged 3.6 yards per carry, and successfully converted on only 5 of their 14 third-down opportunities. They also struggled in the red zone-with a 33 percent conversion rate (1 touchdown in 3 opportunities).

The middle of the Buccaneers line looks vulnerable to the pass rush. The Panthers had two batted passes in the first three possessions. The Giants are very good at deflecting passes at the line of scrimmage - watch out for this in Sunday’s game. Stunts by the Panthers defensive ends worked pretty well, which also bodes well for the Giants. The Buccaneers let the Panthers apply pressure right in Cam Newton’s face for much of the day.

The Buccaneers did not attempt a lot of throws down-field early. They seem to have a quick passing scheme. They had a longer completion to Dallas Clark. One downfield pass to Jackson (where pass Interference was called on the Panthers defense). And then another one to Jackson for a completion. Pro Football Focus says none of these traveled more than 20 yards in the air, however.

You could have probably gathered that from the box-score though. Freeman threw for 138 yards on 24 passes (5.75 yards per attempt, which is awful).

Freeman doesn’t look to make plays by scrambling around pocket, when the protection breaks down he’s running, at least he did in this game.

They use play action a lot, like an annoying number of times.

The Giants have apparently become a farm system for the Buccaneers as D.J. Ware Mike Sullivan, and Bill Sheridan are all with the Buccaneers. Le Garette Blount likes to try and hurdle defenders.

The Buccaneers ran Doug Martin a lot towards the left of the offensive line, almost twice as much as they ran right. 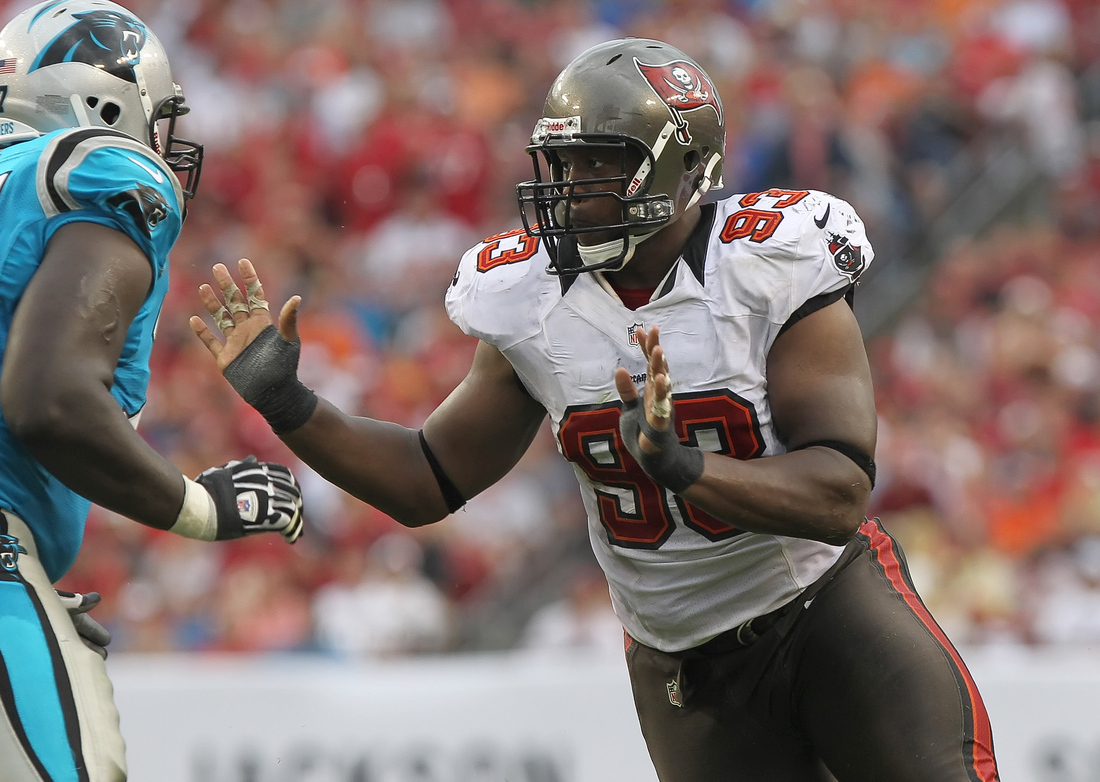 Yes the Buccaneers defense held Carolina to 10 yards rushing, but the Panthers only had 13 rushing attempts. The Giants will run it more than 13 times even if they average -2 yards a carry. But the speed in the Tampa Bay Buccaneers’ back seven is better this year and it should help their run defense. LaVonte David is undersized, but a good young player.

Ahmad Black had an interception, but it was really a terrible throw by Cam Newton much more than it was a good play by Black.

The Buccaneers used three down linemen to rush the passer a few times in the two-minute drill in the first half. And there were a few other times throughout the game they dropped 8 into coverage. I think that’s the smart route against the Giants. The Buccaneers ended up with pretty good pressure numbers on Cam Newton, but that’s misleading and a big reason for that is the poor balance of the Panthers offense in this game. Well, and Gerald McCoy. He is good.

The Buccaneers return units look unimpressive. (As an aside for next week’s matchup, the Panthers special teams look terrible… muffed punts, a blocked punt, no return yardage, an interference with the fair catch as well. Yikes!)

Michael Koenen, Tampa’s punter, had a good game. He downed two punts inside the 20-yard line and averaged 46 yards per punt.

Whether it be looking at the numbers or film, this much is clear: the Buccaneers are a team looking to control the time of possession by running the ball and using a short, quick passing attack and try to win the game with a faster and more physical defense.