While we are talking about NFL Power Rankings I thought I would do something a little different. After the jump, you will find a look at the Giants' roster, with players ranked from 1-53.

Honestly, I know how subjective it is. And I know how much you can argue about this, especially the guys in the middle -- almost anywhere from 10 or 12 right through around 40. I just think it might be interesting to use this as a baseline and see how it changes throughout the season. 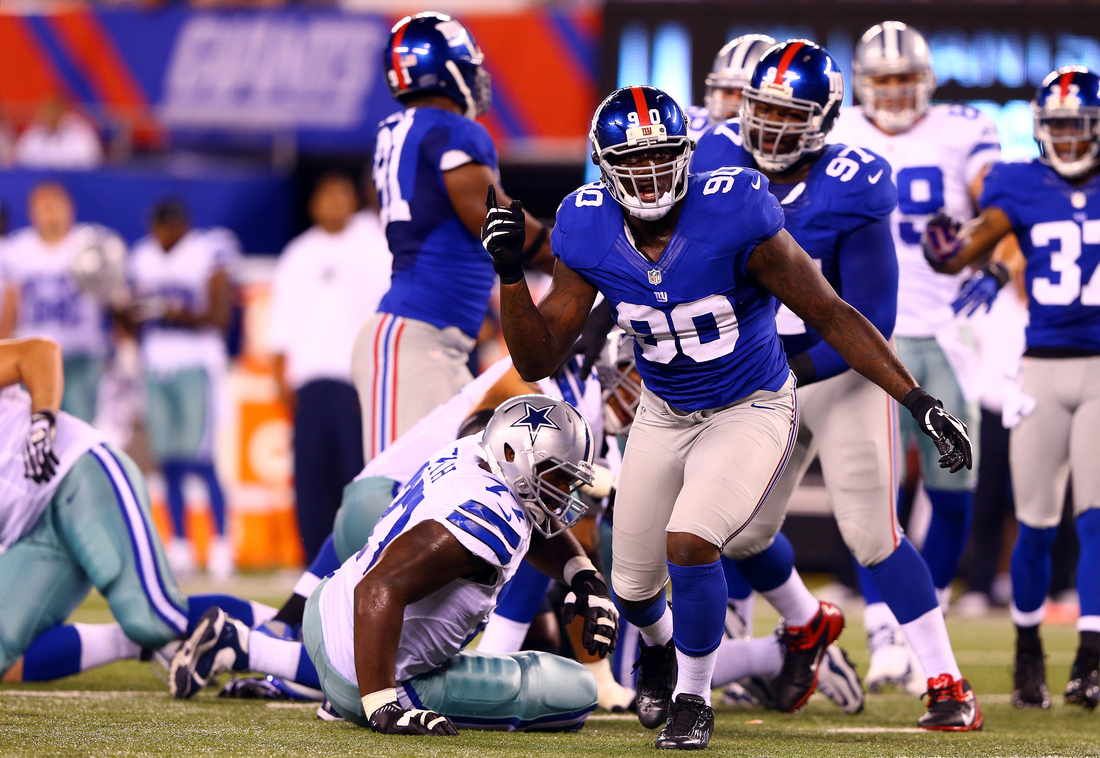 1. Eli Manning -- Anybody really want to argue with this?
2. Jason Pierre-Paul -- Or even with this one?
3. Victor Cruz -- Week 1 drops aside, the Giants need this guy to make big plays.
4. Justin Tuck -- Still the heart and soul of the Giants' defense.
5. Hakeem Nicks
6. Ahmad Bradshaw -- The primary running back on a team that, for the most part, can't run. It is not his fault, however.
7. Corey Webster -- Terrible opening game. Webster, though, is important to the Giants and has to be better than he was on opening night.
8. Kenny Phillips -- Maybe he isn't a superstar, but he's pretty good.
9. Antrel Rolle -- The guy is important to the Giants. Is he really a top-tier safety? You guys can argue about that.
10. Michael Boley -- Big interception in the season opener and a +3.3 rating from Pro Football Focus despite barely practicing in preseason.
11. Chris Snee -- Still good, although maybe not the dominant guy he once was.
12. Steve Weatherford -- A testament to how good he is, and what a fan favorite he is, that he is this high on the list as punter.
13. Osi Umenyiora -- The Giants show him respect by listing him as a starter on their depth chart, even though he isn't one. We should, too.
14. Mathias Kiwanuka -- Still an unsung star on the Giants' defense.
15. Martellus Bennett -- Sort of amazing that he is way up here, to be honest.
16. Linval Joseph
17. Rocky Bernard
18. Domenik Hixon -- Has the No. 3 wide reciever and punt return jobs, and looked good against Dallas doing both.
19. Prince Amukamara -- Not because he has done anything yet -- he hasn't. He is here because of how important he is to the Giants' defense.
20. Henry Hynoski -- I was critical of Hynoski after the Dallas game. After watching the ‘All-22' film that wasn't fair. There were run-blocking issues, but most of it was not on the fullback.
21. Lawrence Tynes
22. Chase Blackburn
23. Zak DeOssie
24. David Baas
25. Kevin Boothe
26. Sean Locklear
27. David Diehl -- I know, I know. some of you would like to see him at No. 53 -- or worse. But, he starts so for now he isn't going any farther down the list than this.
28. Keith Rivers
29. Michael Coe
30. Bear Pascoe -- He is a blocking tight end who struggled with his blocking against Dallas. Mr. Pascoe, Adrien Robinson is knocking on your door. 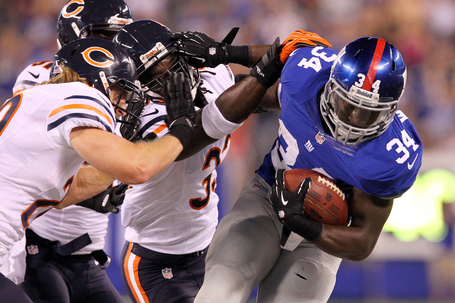 31. Jayron Hosley -- Right now the top-ranked rookie.
32. David Wilson -- Fumble or no fumble, the guy is going to carry the ball some. He will be the kickoff returner, as well.
33. Markus Kuhn
34. Will Beatty -- The Giants need the guy who should be their starting left offensive tackle to move up this list.
35. Reuben Randle -- Didn't play against the Cowboys, so hard to know where to put him. Let's hope he climbs the ladder.
36. Adrien Robinson
37. Jacquian Williams
38. Ramses Barden
39. Mark Herzlich
40. Spencer Paysinger
41. Justin Tryon -- Atrocious work against the Cowboys landed him down here.
42. Will Hill
43. Stevie Brown
44. Adrian Tracy
45. Andre Brown
46. David Carr
47. Jim Cordle
48. Marvin Austin -- Inactive for the opener with a back injury. He stays down here at the bottom until he actually does something productive on the field.
49. Adewale Ojomo -- The undrafted free agent had a great preseason, but was a healthy scratch from the opener against the Cowboys. That puts him toward the bottom of the heap.
50. James Brewer -- A scratch from the opener with a bad back. We still have no idea if this guy can actually play at the NFL level.
51. Da'Rel Scott -- A healthy scratch for the season opener.
52. Jerrel Jernigan -- Being a healthy scratch for the opener is not a good sign.
53. Mitch Petrus -- Being released and only brought back to the roster because D.J. Jones failed his physical makes Petrus the last guy on the totem pole.