Trying to figure out the New York Giants linebacker situation is like trying to put together one of those mystifying 1,000-piece jigsaw puzzles. When you look at all the possibilities everything looks like it fits together -- and doesn't fit together all at the same time.

How defensive coordinator Perry Fewell will utllize what looks like a deep, talented linebacking group -- and which guys will even make the 53-man roster -- is one of the more intriguing stories of the Giants' preseason.

Let's take a player-by-player look at the linebackers as we head into the second half of training camp at UAlbany.

Michael Boley -- Nothing to see here. Boley is the starting weakside linebacker. He hasn't practiced in a few days due to a hamstring injury, giving some other players chance to shine. No worries about Boley, who was terrific a season ago, as long as the hamstring doesn't linger.

Mathias Kiwanuka -- As he did last season, Kiwanuka is splitting his time between the strong-side linebacker role in the base defense and the left defensive end spot (usually) in the teams's four-defensive end NASCAR pass-rushing package. There are not many players in the NFL who can do what Kiwanuka does, and who would do it willingly. That makes him pretty special.

Chase Blackburn -- Blackburn remains the starting middle linebacker, although best guess is that is a job he is eventually going to lose to Mark Herzlich. Blackburn has been fine in training camp, but Herzlich -- and maybe even Greg Jones -- have been better.

Blackburn is not giving the job to Herzlich without a fight, though. "if you’re not trying to strive to get better every day, someone is going to pass you by and take your spot. Then you’re not going to be here very long," Blackburn said. 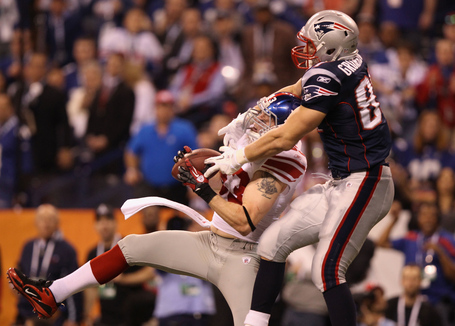 Mark Herzlich -- The aforementioned Herzlich has been the best linebacker in camp over the first eight practices. Herzlich's toughness and his ability to stack the run have never been a question. His athleticism and ability to drop into pass coverage and handle those responsibilities has. The second-year man from Boston College has repeatedly shown an ability to do that thus far.

"We really felt that with a year under his belt, and a chance to be in the offseason program, that this would be an opportunity for him to really come in and know what he’s doing, and be the player that we all think he can be," head coach Tom Coughlin said. "So far he hasn’t disappointed."

At this rate, it seems like only a matter of time before Herzlich takes the starting job away from Blackburn.

Greg Jones -- Herzlich has been the most impressive linebacker in camp, but Jones hasn't been far behind. The second-year man from Michigan State has worked at both the strong side and middle linebacker spots, and has been impressive. This is not the same overwhelmed player thrown into the starting middle linebacker role at the beginning of last season when he wasn't anywhere near being ready for that kind of responsibility.

Spencer Paysinger -- When camp started it was hard to figure out where Paysinger, who made the team as an undrafted free agent a season ago, fit on the 53-man roster. Paysinger, though, has been playing like a guy who has other ideas.

Paysinger certainly is not. Taking advantage of Boley's absence, and the fact that Keith Rivers is still learning the defense, Paysinger has spent considerable time thus far in camp playing as the first-time weak-side linebacker. He has been making plays, particularly in pass coverage. During one practice last week he had his hands on the final two passes, nearly intercepting one and tipping another.

Keith Rivers -- Acquired via trade from Cincinnati Rivers has been running mostly with the second unit, playing the weak side. In recent days he is showing up more and more often. It remains to be seen where he fits with this defense, but he certainly does give defensive coordinator Perry Fewell some options.

Jacquain Williams -- The second-year man gained 20 pounds in the offseason and is now a solid 240 pounds. Williams remains fast enough that he has even worked just a little bit in the hybrid safety/linebacker role Deon Grant played last season. Another guy who gives Fewell intriguing options when it comes to personnel packages.

Jake Muasau -- The Giants were really excited by the possiblities with Muasau when they signed him as an undrafted free agent from tiny Georgia State after rookie mini-camp. Muasau is not giving himself a chance to make the team, however, as he has sat out all but the first one or two practices with an injury.

Muasau would seem likely to go, unless he gets on the field and is absolutely lights out. Clint Sintim is still around, on PUP as he tries to recover from another knee injury. Sintim often wears a sweatshirt that says "Don't Count Me Out" on the front. Unfortunately for him, most people have.

Assuming that Sintim stays on PUP and the Giants keep eight linebackers everyone but Muasau would be safe -- provided there are no injuries. They began last season with only seven linebackers on the 53-man roster, though. In that scenario, somebody would be the odd man out.