Entering training camp one of the big question marks for the New York Giants was the tight end position. Jake Ballard was injured and then lost on waivers to the New England Patriots. Travis Beckum in on the Physically Unable to Perform (PUP) list with a knee injury, and no one knows when or if he will return this season.

The Giants signed Martellus Bennett as a free agent and drafted Adrien Robinson in the fourth round. They also have holdover Bear Pascoe. Let's go player-by-player and look at how the competition is shaping up thus far.

Pascoe entered training camp as the No. 1 tight end after three seasons as an understudy. So far in camp, things have remained that way.

Pascoe has done a good job in the passing game, catching mostly underneath routes. In his fourth season, Pascoe will always give outstanding effort as a blocker and has good enough hands to be useful in the passing game. Given the opportunity, Pascoe believes he can equal the productivity of Ballard last season (38 catches) and Kevin Boss (35 catches) the year before.

"Right now I'm the guy," Pascoe said recently. "I'm looking forward to the rest of training camp and these preseason games to prove I can take over that starting spot.

"This is a great opportunity and I'm just going to keep working every day to capture it." 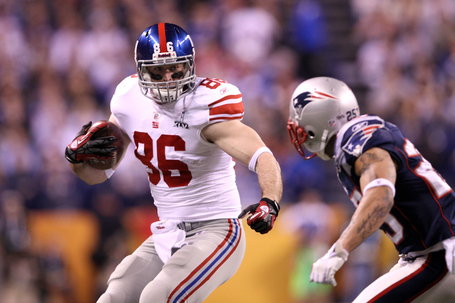 Bear Pascoe makes a catch during the Super Bowl.
(Photo by Elsa/Getty Images)

After caddying for perennial Pro Bowler Jason Witten in Dallas for four years, along the way earning a reputation as an underachiever, the Giants brought Bennett to New York on a one-year deal, giving him an opportunity to prove that he can step out on his own and succeed. "Plants can’t grow when they’re shaded by the tall trees, so I get a little something for myself now," Bennett said early in camp.

In recent days, Bennett has begun to sprout a little as a target for quarterback Eli Manning. He has made some nice receptions, showing an ability to challenge linebackers and safeties on intermediate routes. Over the last couple of practice the Giants have also put in a lot of time working on screens, including throwback tight end screens involving the 6-foot-7 and so far secretive about his weight Bennett.

Bennett comes to the Giants with a reputation as an excellent blocker. It is hard to judge that in camp, but the Giants have often lined Bennett and Pascoe up together in two-tight end sets.

The fourth-round draft pick out of Cincinnati was hurt, whether he wants to admit it or not (and he doesn't) by missing OTAs while waiting for his class at Cincinnati to graduate so he could begin his NFL career. The "JPP of tight ends" is trying to make up for lost time.

Robinson has shown the ability to get open down the middle of the field, but has dropped some catchable balls.

"I think I'm doing alright. I think I still need to focus on the playbook," Robinson said. "I'm getting a little bit of confidence each day. Once I know exactly what I'm doing on every single play I'll fee a lot better.

"Coach [Mike] Pope says when I get to the point where I know everything and I can play fast that's when I will be at my best. I'm still thinking a little bit." 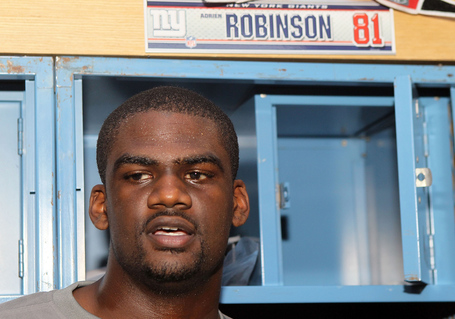 Young players Ryan Purvis, Christian Hopkins and Larry Donnell are on the periphery of the competition. You keep hearing that the Giants like Purvis, who played 10 games for the Tampa Bay Buccaneers in 2010, so I keep waiting to see a catch or a block that makes me take notice. Maybe the film shows something, but I haven't seen it yet.