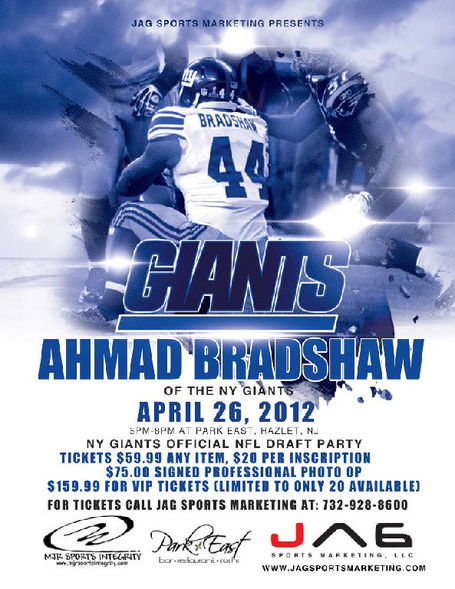 We're just one week away from the 2012 NFL Draft, folks. All of the mocks will be taken out back and shot or exalted, if indeed the shoe fits. The NFL Draft is truly an event that every football fan should experience at least once in their lifetime. However, not everyone is fortunate enough to make it to Radio City Music Hall and take part in the fan festivities that the NFL provide each year. That does not mean that the local fans are able to enjoy every day of this three-day extravaganza, either. The third day is doable. The second day, a bit harder. The first day - near impossible.

The good news for those Giants fans who will not be able to make it to the first night of the 2012 NFL Draft is that they can spend it with their favorite running back, Ahmad Bradshaw. On April 26, 2012 from 6 - 8 p.m. at Park East in Hazlet, N.J. fans will have the opportunity to hang out with and purchase signed memorabilia from Super Bowl XLVI champion, Ahmad Bradshaw. It should be a great night.

For more information go to http://www.mjrsportsintegrity.com/