Where Are They Now? Five Questions with Rodney Hampton

Share All sharing options for: Where Are They Now? Five Questions with Rodney Hampton

With an assist from the Giants' PR department, we are going to bring you a series of five questions with former Giants players this off-season. If you often wonder what some of your favorite players from years gone by are up to, you will want to stay tuned to see if that player is on our list as well. The first one in our installment is with running back Rodney Hampton, who played for the Giants his entire career, from 1990 to 1997, and his 6,897 rushing yards was a team record until Tiki Barber surpassed it in 2004. His five straight seasons of 1000 yards rushing from 1991 to 1995 earned him two Pro Bowl bids, in 1992 and 1993. Let's see what Rodney is up to these days.... 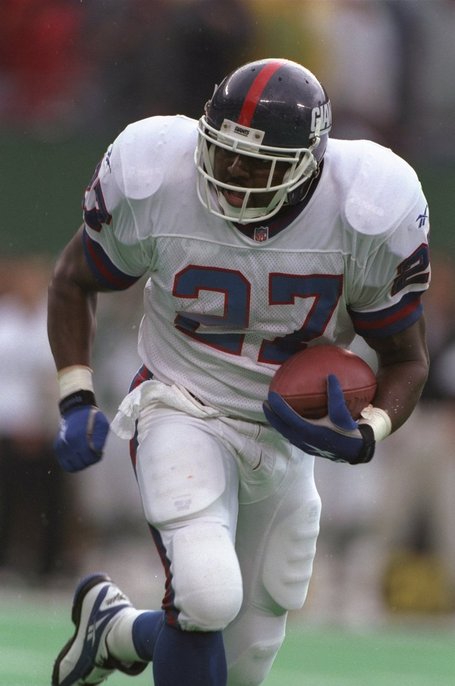 Big Blue View: Where do you live now and what are you up to these days?

Rodney Hampton: I now live in Houston, Texas. I've been married for six years to my beautiful wife, Detra Hampton, who attended my high school. We have three kids, Rani, 17, Rodney, 13, and Rylee, five-years old. I run the Hamps Camp program which is a 501 c3 non profit. I do an after school program with kids, teaching football and the basic skills of life--believe, work hard and be disciplined. Also, I conduct summer camps in the New York/New Jersey area, as well as in Georgia and Texas.

I also do a bowling event for Hamps camp in East Hanover, New Jersey at Hanover Lanes. This year it will be during NFL Draft weekend on Saturday with many Giants' greats. Please come and bowl and support for great causes.

BBV: What is your fondest memory about playing for the Giants?

RH: I remember all great things with the Giants. The Mara and Tisch families were great to me and my family. But what stands out for me with my career was winning the Super Bowl my rookie year and getting a ring. Also, seeing how great the fans are in New York.

BBV: Do you still keep in touch with any of your teammates and if so, which one (s)?

RH: I keep in touch with lots of the guys when I go to Giants games . I see guys from week to week.

BBV: What is the biggest difference between the NFL now and when you played?

RH: What I think is different now from when I played is more media around, and lots of rules changes.

BBV: Did you watch the Giants' playoff/Super Bowl run this past season, and if so what impressed you the most about the team?

RH: I did watch the playoff run and I'm so proud of the guys for turning the season around. Anyway, like I said, I think I'm very blessed to have been able to work for a great team like the Giants and be able to continue to go back and get the same feeling like I'm still playing. So I'm trying to show the same love for my kids and parents at Hamps Camp and hope I continue to bless someone.