Victor Cruz: "I feel like I deserve to be paid more money at this point" | ProFootballTalk
Last year, Victor Cruz earned $450,000. In return, the Giants received a franchise record for receiving yardage, with 1,536 yards. Next year, Cruz is due to make $490,000. He believes he should get more.

"I think I was paid, you know, relative to where I came in this year and, you know, I came in as a free agent so that's the salary I was on, so I don't feel like I was underpaid," Cruz said. "I mean, I feel like after my performance this year, you know, I feel like I deserve to be paid more money at this point. But that's something I'll let my agents and those people take care of and I'll just go out there and play the game."

Torn ACL bad news for Ballard - Giants Blog - ESPN New York
NEW ROCHELLE, NY -- Jake Ballard was hoping it wasn't serious when he went down with a left knee injury in the fourth quarter of the Super Bowl.

Giants to be honored with commemorative NY license plate; some would rather see a 9/11 plate - Shutdown Corner - NFL Blog - Yahoo! Sports
If you're a New York driver, you will be able to get a handsome license plate honoring the 2012 Super Bowl champion New York Giants. There is currently no option, though, for you to get a license plate honoring victims and first responders of the September 11, 2001 tragedy.

This has some New York residents and politicians unhappy. Jim Tedisco, a Republican New York State assemblyman, had this to say. Via the AP:

"I'm happy that the Giants won the Super Bowl as much as the next New Yorker, but who are the real heroes our state should first be celebrating with distinctive plates, the athletes on the gridiron or the first responders and the people who lost their lives on Sept. 11?"

Just before the Giants' final drive, the Patriots coach told his defense to "make them" throw to receiver Mario Manningham. He was far more worried about Giants receivers Victor Cruz and Hakeem Nicks.

But Manningham made him eat his words with a brilliant, 38-yard catch along the sidelines that kick-started the Super Bowl winning drive.

"This is still a Cruz and Nicks game," Belichick said in audio recorded for NFL Films and aired on NFL Network's SoundFX show on Wednesday night. "I know we're right on them. It's tight but those are still the guys. Make them go to Manningham. Make them go to (Bear) Pascoe. Let's make sure we get Cruz and Nicks." 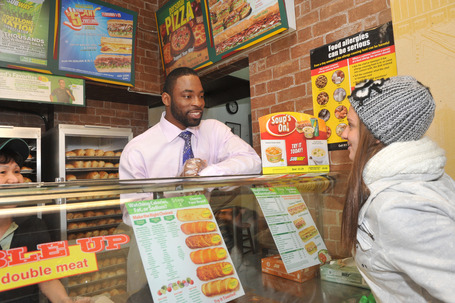 Justin Tuck surprises customers at a local Subway restaurant in New York,
Thursday, Feb. 9, 2012, with free $5 Footlongs in celebration of FebruANY and his
team's big win this past Sunday. (Diane Bondareff/AP Images for Subway)

Tuck is hoping for Umenyiora's return - Giants Blog - ESPN New York
"I would hope so, obviously," Tuck said. "We had seven great years together being kind of that 1-2 punch on the line. We had [Michael] Strahan early in our careers and JPP [Jason Pierre-Paul] now. It's fun to play with that guy, man. I'm hoping that he can come back but, more than that, I'm hoping that he can do what's best for him and his family."

Tuck said he played with more pain this season than at any point in his career.

"It was rough man," he said. "But I think our trainers did an excellent job of getting me ready for Sunday. That’s all I asked for. Football is a contact sport. You’re going to get some bumps and bruises and some hurts here and there, but I think mentally, I was in a good space those last couple games this year and that allowed me to just go out there and focus on helping my team."

Giants' Jason Pierre-Paul: Give Osi Umenyiora what he wants | NJ.com
"Personally, give him what he wants," fellow defensive end Jason Pierre-Paul said during an appearance at a Manhattan Macy’s. "Osi’s a great player and I’d love to play with him for the rest of my career until he’s ready to leave."