The New York Giants are heading into a critical off-season that will include serious debate about the futures of many accomplished veterans who have helped them win Super Bowl titles. How they answer those questions will largely shape what they look like going forward.

Regardless of what happens Sunday against the Philadelphia Eagles the New York Giants enter into the off-season with many, many questions to answer.

One of those is why, as head coach Tom Coughlin said earlier this week "the football has not been what we expected it to be" for the Giants. How in the world did a team that won six straight games to win the Super Bowl last season, then started 6-2 this season, fall so quickly?

The larger question, though, is what will the Giants do about it heading into the 2013 season? The biggest part of that will be correctly evaluating the current roster.

Can Jerry Reese, who has sometimes held on to players he drafted well after they showed they were unlikely to be productive players, correctly evaluate current players who fit that description and move on from them?

Can Tom Coughlin, loyal to veterans to a fault, take his feelings for veterans who have helped him win two titles and have an immensely successful run in New York out of the equation and move on from players whose names -- and paychecks -- now exceed their value on the field?

My guess is that they can. After all, the bottom line for both is winning and for whatever reason the team they constructed for 2012 could not get that done. Some changes will be necessary. Whether they will be "wholesale changes" or not remains to be seen.

Here are 10 personnel questions Reese, Coughlin and Co. need to answer prior to next season:

1. Who plays right tackle? David Diehl has been a good Giant, and his unselfish willingness to play anywhere on the line has probably helped the Giants win more than his actual physical contribution. Thing is, no matter what position he has been playing Diehl has been among the worst pass-blocking linemen in the league for several seasons now. He has one more year at $4.1 million left on his contract. Can the Giants pay him that money and tolerate his inadequacies? Can they give that job to James Brewer, who has really done little more than sit and watch for two years? Should they re-sign veteran Sean Locklear as either insurance or the starter? Should they use a high draft pick on a tackle?

2. Running back quandary? The toughness of Ahmad Bradshaw, and what he has meant to the Giants the past few seasons, can't be underestimated. However, with his history of foot injuries and annual inability to practice how much longer can he be counted on? He has $7.75 million and two years left on his contract. Should the Giants swallow that and move on with David Wilson, Andre Brown and Da'Rel Scott? Should they keep the status quo and leave Bradshaw as the primary back? Is it time for Bradshaw to take a secondary role, to step aside for Wilson as the primary back, as Brandon Jacobs was forced to do for Bradshaw a couple of seasons ago? 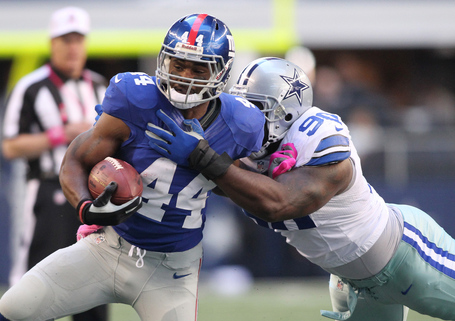 3. Kenny Phillips? The veteran safety is a free agent after this season. Do the Giants spend big money to keep him despite the knee troubles that have plagued him during his career, costing him significant parts of two seasons? Do they make him a short-term offer and hope he will stay? Have they seen enough from Stevie Brown and Will Hill to be comfortable letting Phillips move on?

4. What about middle linebacker? Everybody loves the Chase Blackburn story -- how he came back during the middle of last season, helped shore up a struggling defense and was a key part of why the Giants won a Super Bowl. The Giants love his smarts, his knowledge of the defense and his attitude. Truth is, though, if the Giants thought Blackburn was a real starting middle linebacker they wouldn't have cut him loose in the first place. Considering how much the Giants struggled against the run this season you have to think that if the Giants believed Mark Herzlich was the answer in the middle he would have been given the job at some point. So, what do the Giants do there? 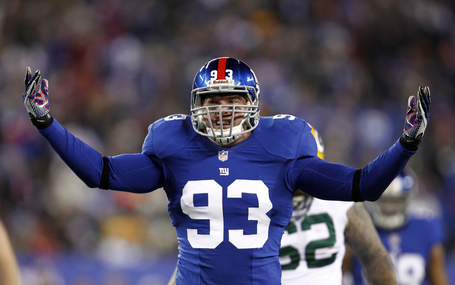 5. Osi Umenyiora? Umenyiora believes he will be gone after this season, with years of complaining about his contract and his role having left a divide between the talented defensive end and the franchise. Considering the decline of Justin Tuck should the Giants kiss and make up with Umenyiora and invite him back? Even if they want him back can they pay him the kind of money he will seek on the open market? Will anyone, for that matter, pay top dollar for a defensive end who will be 32 next season?

6. Justin Tuck? The Giants' defensive captain always seems to be hurt, with a shoulder injury that never quite seems to go away (thanks, Flozell Adams!). His production has gone down dramatically and it seems his desire to play is questioned in some quarters. Do the Giants believe Tuck can be healthy and 'All In' for 2013? If not, do they really want to pay him the $4.5 million he is due in the final year of his contract?

7. Corey Webster? The veteran cornerback, who will be 31 next season, has had a miserable season. He suffered the indignity Sunday of having the Baltimore Ravens target him 14 times while virtually ignoring the rookie reserve (Jayron Hosley) who was playing on the opposite side. He is owed a whopping $7 million in 2013, the final year of his deal, which would seem to make him a candidate to be shown the door.

8. Martellus Bennett? The Black Unicorn has 54 catches, but he could be classified as inconsistent. The Giants brought him in on a one-year deal. Has he shown them enough in terms of both production and attitude to warrant a long-term commitment?

9. Ramses Barden and Travis Beckum? I put these two guys together, because Reese drafted both of them in 2009 when the Giants were trying to rebuild their receiving corps after the Plaxico Burress fiasco. Neither player has ever really done anything and both can be free agents this off-season. Is there any real reason for the Giants to entertain bringing either of them back?

10. Marvin Austin? The Giants drafted Austin in the second round in 2010 hoping he would become a dominant player in the middle of their line. He missed all of his rookie season with an injury and was basically non-existent this season. He has played sparingly in six games and made five tackles this season. Can the Giants hand him a roster spot and hope he turns into a player, or should they cut and run?