Breaking down some of the key plays from Baltimore's loss to Denver last Sunday. What can the Giants find to take advantage of?

Based on the score of the game between the Denver Broncos and the Baltimore Ravens (34-17 Denver with 14 points coming for Baltimore in the fourth quarter) I thought this game was more of a blowout. The truth is, however, that the game was close until a critical play late in the second quarter, and the Ravens can really beat themselves sometimes. Let's break down the turning point of this game.

The score was 10-0 late in the second half despite the Ravens playing pretty well on defense. The Broncos had to dink and dunk all the way down the field and the Ravens had been limiting big plays out of the Broncos offense and Peyton Manning. 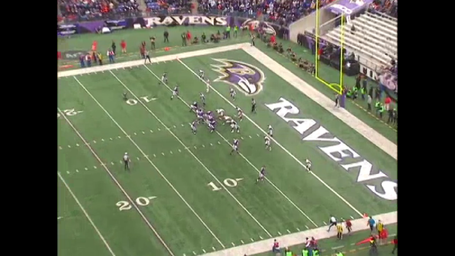 The Ravens had the ball inside the 10-yard line trailing 10-0 and looking to put points on the board. There are 34 seconds left to go in the half and the Ravens have all three time outs. Up to this point the Ravens ran an effective two-minute drill with two big plays (a nearly 50-yard pass to Jacocby Jones on a straight "Go" route, and the play before this one, a 14-yard catch and run by Torrey Smith on a short underneath pattern).

The Ravens decide for whatever reason to not take a timeout and come out in a four-wide formation. 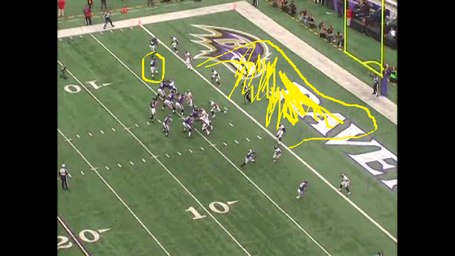 Circled in yellow is the intended target (Anquan Boldin). For whatever reason the Ravens decide they are not going to attack the middle of the field at all (wonderfully shaded in yellow). 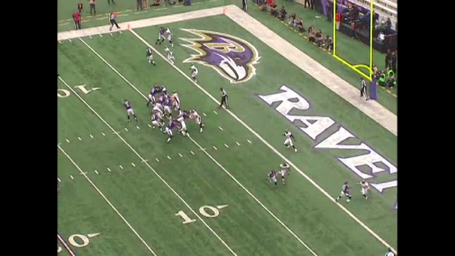 Quarterback Joe Flacco is releasing the football. This is the problem with having a big arm -- sometimes you think you can make every throw (the Giants also have a QB who thinks that, but has made a career up to this point of proving it). 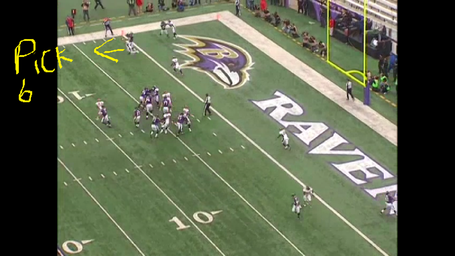 Predictably, the ball is intercepted and taken back to the house, putting the Ravens down 17-0 heading into the half instead of behind 10-7, or 10-3 at the worst.

I set out to show you a way that the Ravens were using Ray Rice and how dangerous he could be, but in this game they decided to ignore him (by a very quick and very rough scan of plays) Ray Rice had four carries and probably about 10 yards in the first half. Their rookie draft choice, Bernard Pierce was actually more effective early and had just about the same number of touches.

I'll also show you the final dagger play, a 51-yard touchdown pass from Peyton Manning to Eric Decker with about 10 minutes left to go in the third quarter. 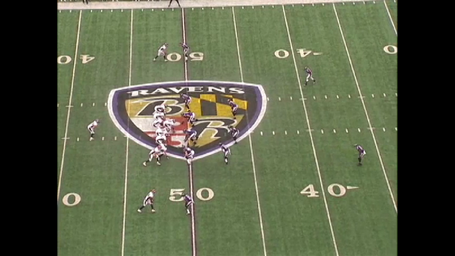 Here's a look at the pre-snap formation. 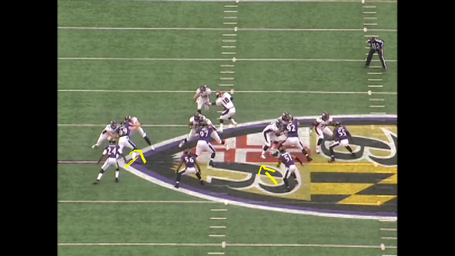 Here's the end zone look. The run action gets the linebackers to bite hard. 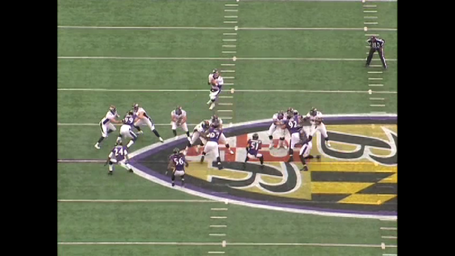 Just another look. If I'm on this play and I'm No. 51 and I know I've already been beaten by the run action and I'm facing against Peyton Manning, I think I just shoot the huge gap here and try to sack him, but of course coaches don't like when players free lance. 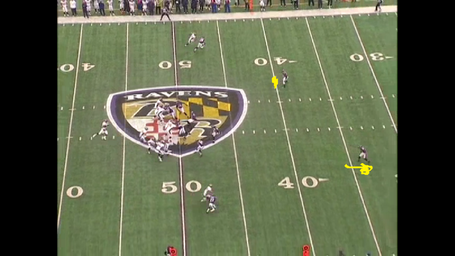 The two lines here indicate the safeties feet positioning. You notice one safety quickly recognizes the run fake and has his feet in a position to take away the deep pass. The other is standing flat footed at the 40-yard line. One of these players is Hall of Famer Ed Reed, the other is not. 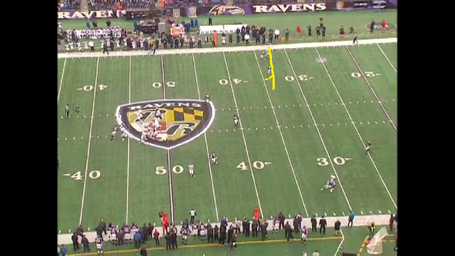 There's an old axiom in the NFL -- If you're even, he's leaving. Notice here the safety who had his feet flat the 40-yard line now has the "yellow even line". He never gets the proper depth, while on the other side of the field you see text book safety play. Once again, one of these guys is Ed Reed the HOF, the other is not.

Unfortunately, for Reed, on this play Reed is Mr. Even. 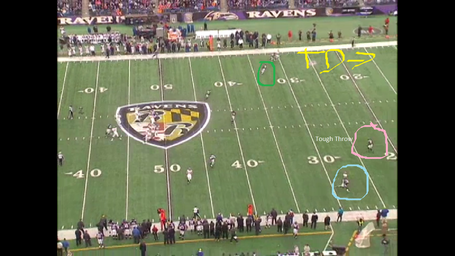 And Decker runs right by everyone for the touchdown.

Having watched the Giants play all year this play would be impossible.A) the play-action passing game has been below average for the Giants this year. According to Pro Football Focus, Eli Manning has a 50 percent completion percentage this year off play-action passes and a -11.3 play action pass completion percentage differential. The worst in the league in qualified passers (27 of the starting QB qualify).

B) Manning would probably miss the throw. I don't know what's up with Eli, but all of his deep passes in 2012 seem to be JUST short, or just too long all year. This year the Giants have 23 completions on pass plays that traveled at least 20 yards in the air, last year the Giants had a whopping 43 of them. Last year they these types of passes were completed at 46.8 percent of the time (which is good because it's a low percentage pass), this year the percentage is at 40.7 percent.

What might be the biggest difference between the 2011 offense and the 2012 offense? Last year the Giants attempted more than 100 passes 20 yards or deeper down the field (Drew Brees was second in the league with around 70), this year that number is close to 50.

Personally, I think the Giants should be taking more shots down the field, whenever they can, not less.

That's your film review for today, ladies and gents.