I wanted to take a look at the Atlanta Falcons and what the New York Giants did to have success against them in last year's playoff match-up. Even though the teams are not the same, they have a lot of similar personnel.

First I'm going to start with a 34-yard run by Brandon Jacobs in the second quarter when the score was 2-0 Atlanta. The Giants did not have a lot of success running the football last year during the regular season, and Atlanta countered that by routinely playing only seven in the box, especially early in the game. Here is one play where the design of a run is terrific, and springs Jacobs for big yardage.

The screen shots are from the All-22 camera angle so it's not quite as easy a picture to see, but you can see all of the players. 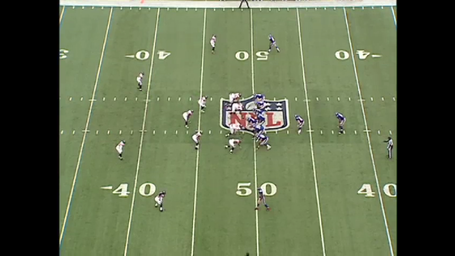 This first image is the pre-snap look. The Giants are in I formation, with a TE and 2 WR. Brandon Jacobs is the running back. 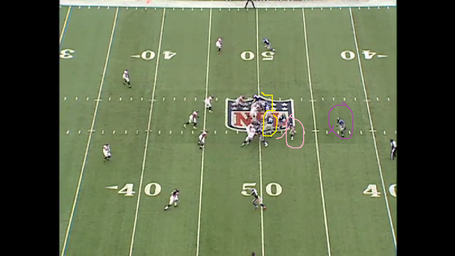 Here is the look right after the snap. Hynoski circled in light pink is going to attack the left side of the offensive line, usually indicating run to the left. Circled in yellow is Kevin Boothe he will be pulling to the right. Jacobs (circled in purple) makes a strong move to the left and it looks like he'll follow Hynoski. 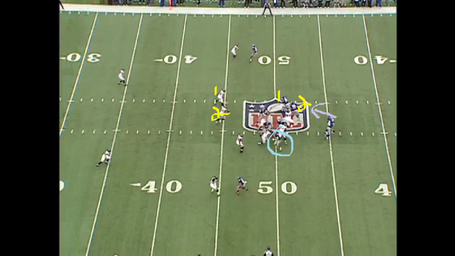 Hyoski (circled in blue) is out blocking the linebacker. The Giants have won this run based on the alignment they have 2 offensive line (for your convenience marked "1" and "2") against two Falcons linebackers (also marked). Jacobs has now received the handoff from Eli and heads to the right side of the offensive line. 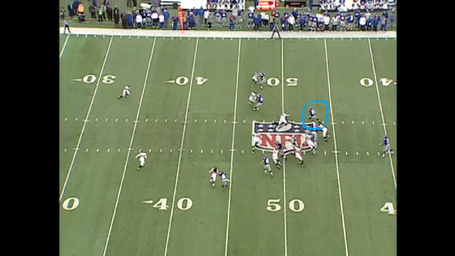 Jacobs (circled in blue) has a huge lane, the Falcons player at the 50 yard line is actually being blocked low by a Giants offensive linemen and won't have a chance to make the play. Jacobs takes the ball 39 yards for a big run that led to a 4-yard Hakeem Nicks touchdown reception on a pass from Eli Manning (and it was a terrific catch).

Hopefully the Giants can create this type of space in the game on Sunday, and if they do, David Wilson won't just take the ball 39 yards.

And Here's a play where the Falcons' offense had some success (that did not happen very often in last year's playoff game). This is a similar concept that has given the Giants some difficulty this year. 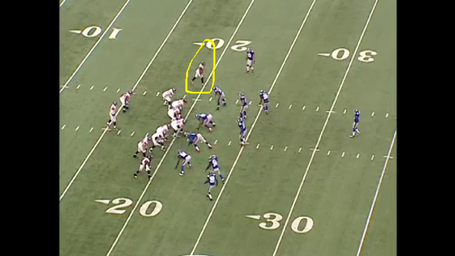 The Giants planned on stopping the run in last year's game and often had eight men in the box, moreso than I remember from watching the game live last year.

On this play the Falcons have the formation very tight, Roddy White is circled in yellow. 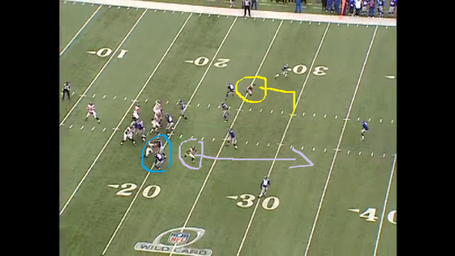 White is circled in yellow and is going to run and in route. Jones (circled in light purple) is going to try and blow the top off of the coverage by just streaking down the field. In blue, Jason Pierre Paul is chipping Tony Gonzalez, Antrel Rolle will have coverage responsibility where Gonzalez ends up. 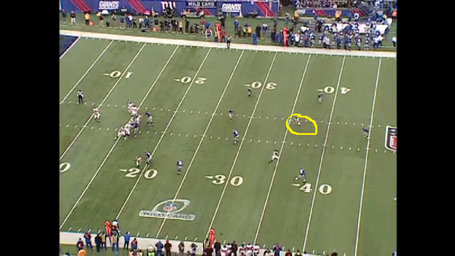 White is circled in yellow and has found the soft spot in the zone. Jones is still streaking up the middle of the field. 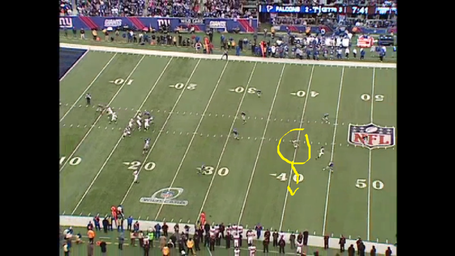 White has a lot of room to operate because Jones carries the cornerback with him and the safety must protect against the big play. Nothing fancy, but a concept that has given the Giants problems a few times this year (against Green Bay and again against the Bengals); in these three plays, the teams kept seven or 8 in protection and sent out only 2 or 3 players into routes. The plays were long developing routes that focused on one half of the field, negating the numbers advantage of the Giants zone.

The Giants have to win the battle up front in the trenches to counter the max-protection schemes, which has been a problem a times this year.

This was not an exciting play to show, rather just one of the few effective plays the Falcons ran last year against the Giants. With the Falcons running game being less effective this year than it was last year, I'd expect to see more passes like this one.

I just want to take a look at one more play because it was a weird play to re-watch. This play is the first failed 4th and 1 conversion the Falcons attempted in the playoff game. 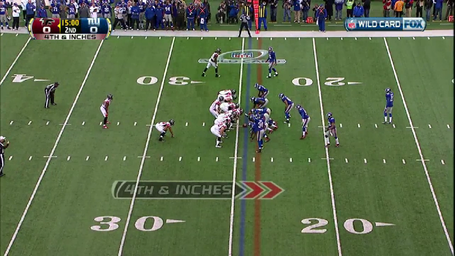 Above is the first image and the original formation. 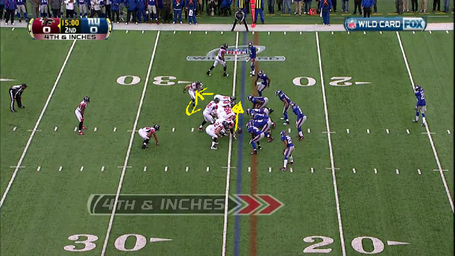 The Falcons shift the entire offensive line over like we're watching a college football extra point or playing musical chairs. The guard is now going to snap the football and it's a very unbalanced offensive line.

The Falcons then send the TE in motion, he steps back, runs to the middle of the field pretends to turn back to his original spot, and then crosses the field. He confuses no one. 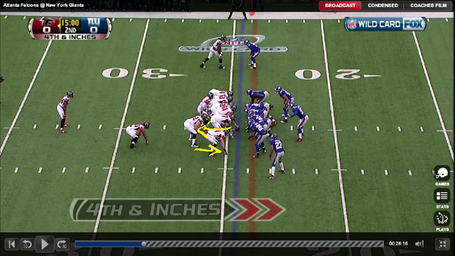 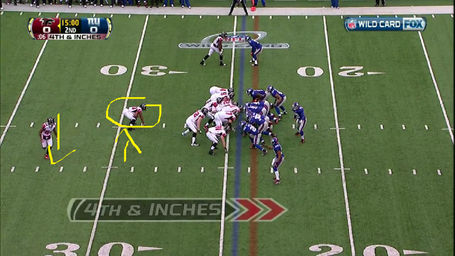 Now the Falcons shift over the full back (Michael Turner on this play) and send the running back (Roddy White) into motion.

Then they run the QB sneak that got stuffed. Such a goofy play if you can remember it. The still shots don't do it justice.

The Giants were able to pound the football on the Falcons last year and hit timely passes. This year the Falcons are struggling to stop the run giving up 4.9 yards per carry and 14 touchdowns (5th most in the league). They have also given up a ridiculous seven rushes of more than 40 yards (worst in the league), and are a team that is struggling to tackle. They have missed 102 tackles on the year according to Pro Fooball Focus (the Giants on the other hand have missed 62), the Lions who are considered a bad tackling team have missed 92. The Saints who are considered absolutely brutal at tackling have missed 110), The Eagles who gave up tackling three weeks ago have missed 91, and the Panthers who are probably the worst tackling team I've seen have missed 116.

That's a long-winded way of saying the Falcons are terrible at tackling and stopping the run. We might again next week be talking about whether or not David Wilson should stop doing backflips in the end-zone.

They do, however, have Asante Samuel. And whenever Asante Samuel is playing he is one of Eli's three favorite targets, so that's something to watch out for as well.

This should be a good game, depending on which Giants team shows up on Sunday.