Today we're looking to take a look at how David Wilson did in pass protection Sunday against the New Orleans Saints. It's hard to know without knowing the play call Wilson's exact responsibility in protection, but you can usually have a pretty good idea. I just don't like to make definitive statements because I'm not in the huddle. With that being said, here's Wilson in pass protection on Sunday. 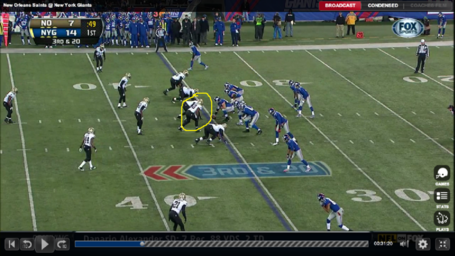 Based on the pre-snap look, there are likely four or five pass rushers on this play with the most likely scenario being No. 50 on the Saints (circled in yellow) blitzing in between the center and guard, which is likely Wilson's responsibility if he comes through the line clean.

What is slightly different about this alignment is there are three down linemen and one standing up (right defensive end across from Diehl) like he is playing as a 3-4 rush linebacker. 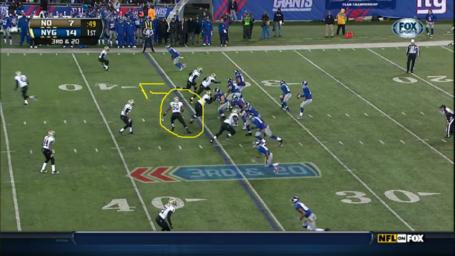 Curtis Lofton (No. 50 circled in yellow) does not blitz and instead drops into coverage. There are four rushers on this play against five Giants' offensive linemen. Wilson scans the field and sees that the Giants have the numbers in pass protection. 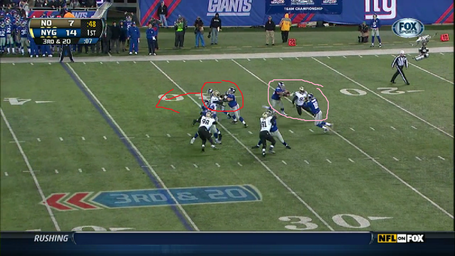 The Saints run a stunt and Diehl gets beat. Wilson is going to release into the open field, he chooses not to chip against Diehl's man (was he suppose to?). Manning has pressure and is going to move out to his right. 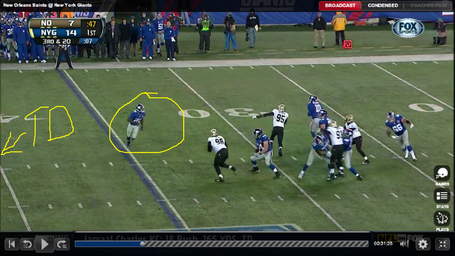 Wilson leaks out And only has to juke seven guys and go 65 yards for the touchdown, an easy feat for "Paul Bunyon Sanders Jackson Flip Wilson". But Eli has a rusher in his face and will roll out to his right and throw the ball away.

Truth be told, without the all-22 I can't actually tell how much room Wilson has to operate if he does get the ball. I think there is a linebacker just off screen at the 41 and some defensive backs. He might not even get the first down.

On this play, Wilson did not chip any linemen, but he also made the correct read in terms of his blitz coverage responsibilities (no one blitzed) and then got quickly out into his route. I would guess success. 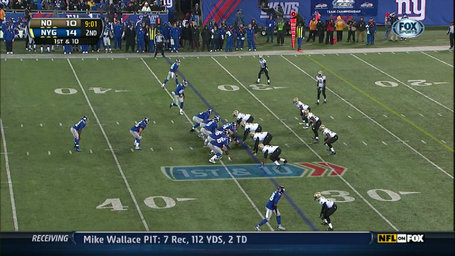 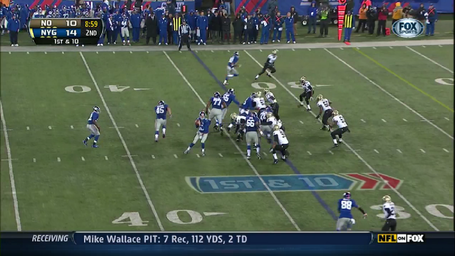 Quick slant to Nicks. Nothing to really see here, but it's nice to see Manning making adjustments. Up to this game nearly every play Wilson has been on has been a run or designed pass for Wilson. On this play it looks like a designed run. If you look at the snapshot you can see that Kevin Boothe is pulling to the left and Hynoski as well. It's not a play action, it looks like a designed run, but Eli and Nicks go into pass mode for a seven-yard completion. Plays like this will help keep defenses from cheating on the run when Wilson is in.

This was the most important play Wilson made in pass protection. 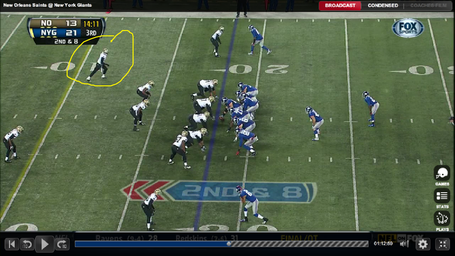 Pre-snap look. The safety circled in yellow is beginning to move towards the line of scrimmage, indicating a potential blitz. 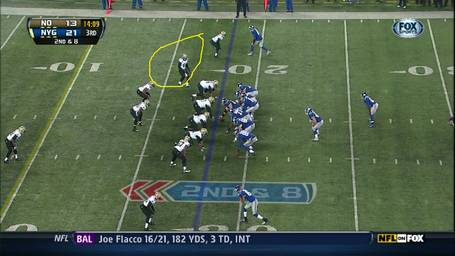 Just another look at the final defensive formation. 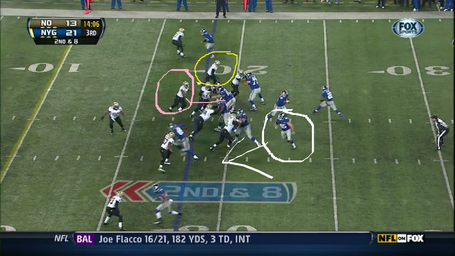 Hynoski has a route to run (circled in white). He gets into his route immediately.

Circled in pink is another extra rusher. The Saints bring six rushers against the Giants six man protection scheme (5 offensive linemen and Wilson). Wilson has to know whether he has the inside blitzer, or the safety on the outside. Baas takes the guy circled in pink and Wilson's responsibility is the DB. 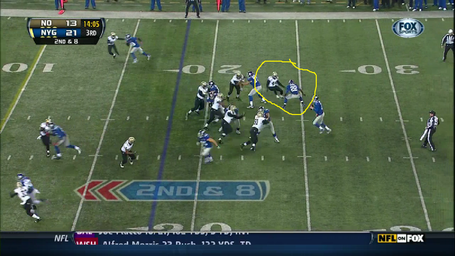 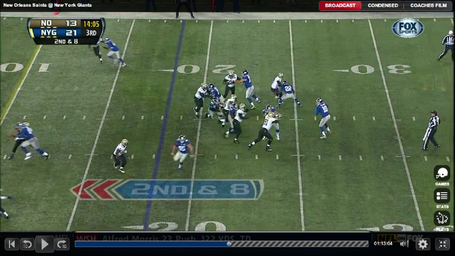 He's now squared up, one on one. 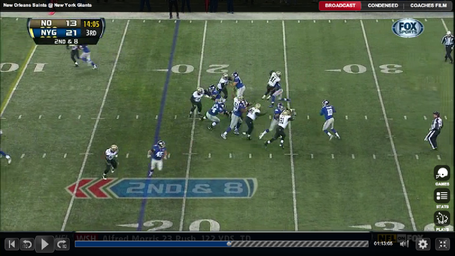 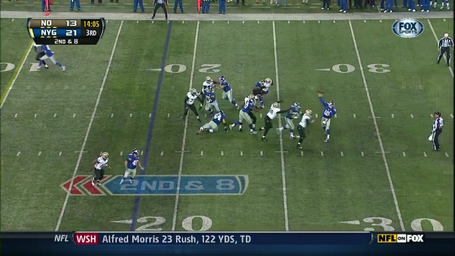 And he tackles him. 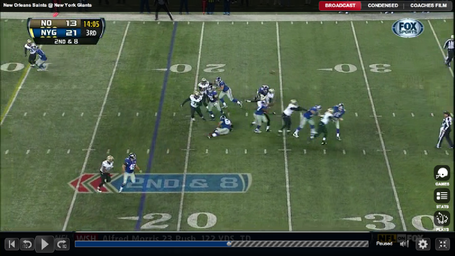 Wilson got away with a holding/tackle here, but he knew his assignment, made the correct read and gave good effort. That's a sign of positive progress. The fact that Wilson was even in on the passing play which was a deep developing route is also a good sign that the Giants honestly intend to move forward using Wilson more.

Here is the last pass play Wilson was in on. 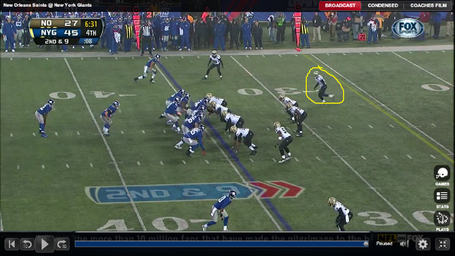 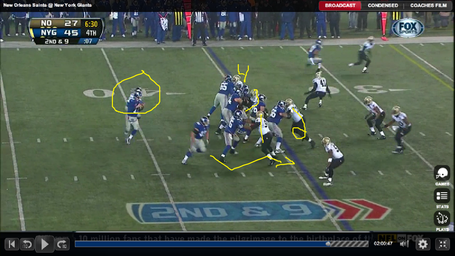 .The Saints brought four guys against the five offensive linemen. Circled in yellow is Wilson who steps up to scan the pass protection and the potential blitzes of the Saints. Hynoski's responsibility is likely the linebacker where the arrow points, but the Saints only bring four, so he's going to release into a route. 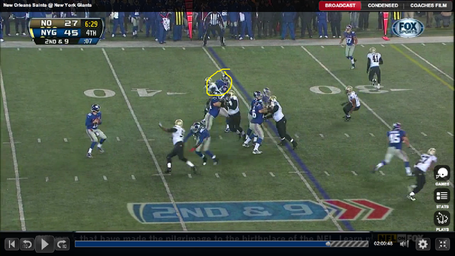 Wilson released out into the route because there is no blitz coming. Beatty is going to get beat by the DE, though, and Eli will throw the ball away (for an intentional grounding penalty). Again Wilson didn't chip on his way out, but that's likely not his assignment.

I thought Wilson did a good job in pass protection, albeit it was only three plays where he had pass protection responsibility during the game. He also went out for a pass route that was negated by a Ramses Barden penalty, and was in on what looks like a designed run play that Manning changed to a quick slant. Wilson didn't show the best technique on his one block because he let the DB turn him a bit outside before making a move inside and Wilson had to tackle him to get him down, but he was in the right position and the fact that the Giants are using Wilson on pass plays is a good sign.

I also would like to note that I liked the way the Giants rotated in offensive players in this game. Jernigan, Barden, Hixon, Randle all rotated in at wide receiver, but I think they should do it even more. Give the defense more to plan for to continue to improve the offense.

Hynoski was used multiple times as the blocker in shot-gun (and he walloped a blitzer once or twice), and Lumpkin, too, can block back there.

I think the Giants didn't use their versatility enough in the first half of the season and are doing a better job of that the last two weeks.