Here are five key plays from Sunday's 52-27 victory by the Giants over the New Orleans Saints.

Let's take a look at the five key plays from the New York Giants and New Orleans Saints game.

Great. Just what the rest of the NFC East needs: A good Giants player with a signature TD celebration.

No. 1 -- David Wilson takes a kickoff 97 yards for a touchdown

The only thing that sucks about David Wilson is that he doesn't have a name that lends itself to an easy nickname.

Even on the offensive line we have: "Son in Law", "The Turnstile","Baby Got Back" (Ok I made this Kevin Boothe nickname up right now).

We'll have to work on one for Wilson.

Because that's what I already yell every time Wilson touches the ball. It just feels like that's going to happen.

No. 2 -- Antrel Rolle forces a fumble that is recovered by Linval Joseph

On the first drive the Giants had to punt, and then Antrel Rolle and Stevie Brown forced a Saints fumble that Rolle recovered and you think, yes, let's get the Saints out of the game early.

Then Eli throws a pick six. When you're playing a team that is slipping right out of the playoff race you can't give them momentum early, which predictably the Giants did.

And then Wilson returned the ensuing kickoff for a touchdown. The next offensive series for the Saints Rolle forces another fumble.

What a crazy turn of events.

And did anyone catch the stiff arm Joseph gave Drew Brees? 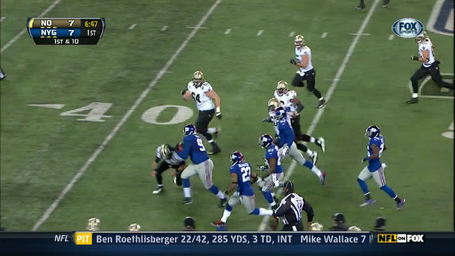 Can we please get this guy the ball in the open field more often?

No. 3 -- Brees is intercepted by Stevie Brown

Brown has blown some big coverages this year, but man, oh man does he know how to find the football. It seems like he's around every turnover. And when he gets the turnover he knows how to create field position. I'm not saying he's Ed Reed or anything. I'm saying he's better!

In all seriousness, the major difference between a player like C.C. Brown and Stevie Brown is one JUST gives up big plays (C.C. Brown), and the other creates a ton of them. (This is a slight exaggeration and no one gives up as many big plays in a season as C.C. Brown did in 2009).

No. 4 -- Jerrel Jernigan takes a kickoff back 60 yards to set up a Victor Cruz 10-yard touchdown pass

There were a lot of big plays in between Brown's interception and this play (Wilson scored a touchdown, Hakeem Nicks caught a touchdown pass), but Darren Sproles also had two quick touchdowns during this time and the game was getting close again.

The Saints tried to keep the ball out of Wilson's hands failing to realize that Jernigan was drafted in the 3rd round to be a dynamite return man, and he showed why on this play.

This was a huge play that didn't allow the Saints momentum to get out of control and really put the game out of reach, when Steve Brown grabbed another interception.

What an exciting game!

I will say this, no team in the league is as emotional (fun?) to watch as the New York Giants. Sure there are other teams that go through similar heart-breaking losses as the Giants do and has big triumphs as well, but no team can match the roller coaster ride the Giants can!

On to next week where a Falcons team just suffered a bad loss at home, and an even worse loss in last year's playoffs will be looking to play the revenge card, but unlike the 49ers and Packers (who got stomped out), the Falcons never called the Giants lucky.