Two weeks ago, I broke down the opening drive touchdown to A.J. Green, where I concluded (based on educated guesses of what the play call was) that the Giants players were fooled by the Bengals' play action and did not properly execute Perry Fewell's play call (considering every player on offense was wide open; Jermain Gresham had a good 10 yards of separation behind the safeties too for an easy touchdown as well). This week the Jordy Nelson touchdown play is a little more difficult to pin the blame. Let's take a look at what happened. 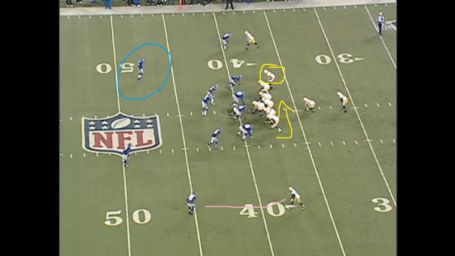 Tom Crabtree is circled in yellow. The Packers send him in motion to the opposite side of the line. Phillips (in blue) seeing this moves up towards the line of scrimmage. Prince Amukamara (pink line) is given the receiver on the left side a lot of cushion. Webster is lined up in press coverage on the X receiver (Jordy Nelson). 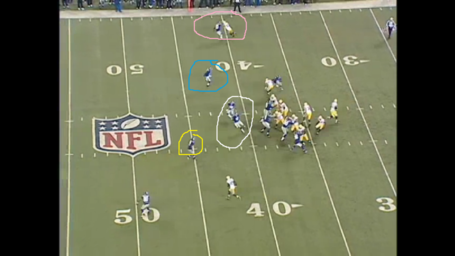 In the second image the Packers have run a play action (like on the Bengals play the week before) with Rodgers rolling out to his right. The two linebackers (circled in white) have recognized pass and are turning to get depth. Prince Amukamara is playing deep (not circled). Corey Webster appears to be in man coverage on Jordy Nelson (circled in pink). In blue, Kenny Phillips who had moved closer to the line of scrimmage is looking in the backfield. I'm not really sure what his assignment on this play is. Is he spying on Rodgers? Is he playing the intermediate part of the field? Is he still thinking run? 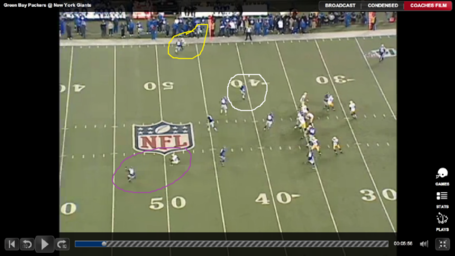 Phillips is circled in white and it's now clear that he does not have any plan to play the deep part of the field (I'll have to assume it's the play call). You can count five Giants defenders playing coverage in the middle of the field, plus the two cornerbacks. If you haven't noticed by now this is only a 2 man route by the Packers. Amukamara is lined up against the other outside receiver in purple. This man will turn outside and is pretty well covered because of the man playing underneath and the linebacker dropping into coverage. 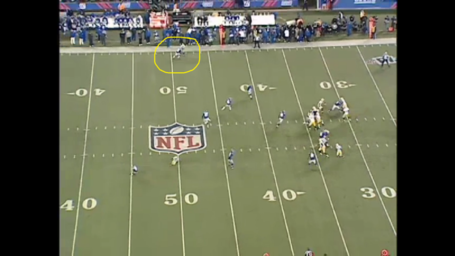 Nelson is circled in yellow in this play (image 4) and this moment where I tried to freeze the play Nelson is slowing down to make what looks like a curl route (spoiler alert--he's not). 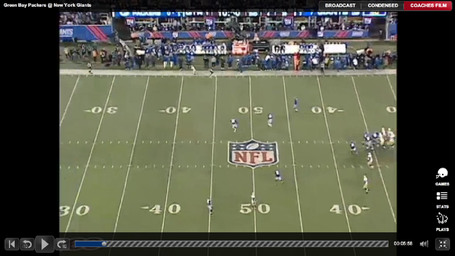 Touchdown. Jordy Nelson (thanks for the fantasy points by the way).

See here it's harder for me to blame anyone on the play, but if I had to (without knowing the play call) I'd blame Perry Fewell. That's not Revis on an island (or even Prince Amukamara) that's Corey Webster. Nelson has the most touchdowns in the league at WR the last two years (16 last year, 6 this year). And Webster has not been lock down. If the play call was man coverage with no help over the top, that's not a great call.

Even though I understand the thought process. There is nowhere to throw the ball short, which the Packers love to do because the short passing lanes are all clogged.

If Phillips (or Brown) was supposed to stay over the top and protect against the big pass play, then that's on the players for failure to execute. It's hard to tell based on what happened what Phillip was suppose to do. Also have to credit the offense for a well timed, max protect deep play action pass. 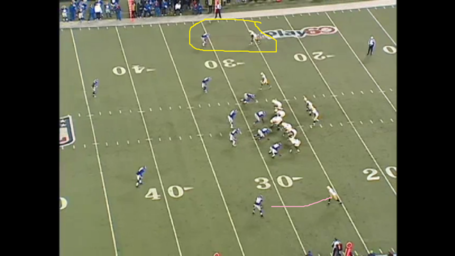 In image 6, the first in the Corey Webster INT. Prince Amukamara (pink line) and Corey Webster (circled in yellow with who I believe is James Jones) are in off-coverage. The Packers are in shot-gun formation. 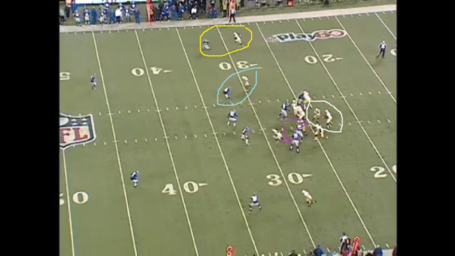 Rodgers (circled in white) runs a play fake again. As an aside the purple line shows Osi Umeinyora jamming the TE and then stunting inside. It's a four man pressure package. Circled in blue is Randall Cobb. Circled in yellow is Webster. Take a look at Webster's body position here, he's looking in the backfield and playing the coverage inside. 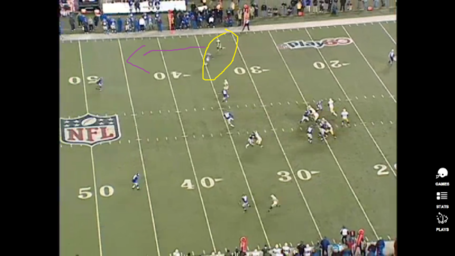 I'm convinced that Webster is convinced this pass is going to Cobb now even though Rodgers is still holding the ball. I think if Rodgers throws the ball right up the sideline here there's a chance at a decent play (though Brown could get over there in time to break it up). The over the top help here allows Webster to take a chance here. 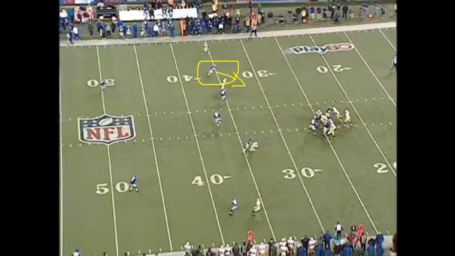 Webster playing Fewell's "read and react" is breaking on the pass the moment Rodgers releases it. 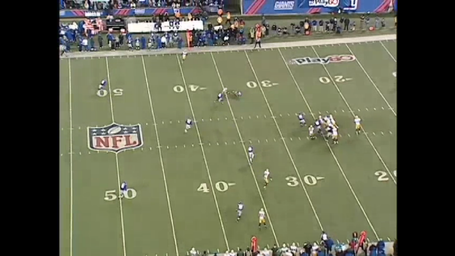 This is zone coverage at it's finest. Webster recognized that based on the coverage, Rodgers should have room to operate underneath to Cobb and was read to brake on that pass without Rodgers ever realizing it. Nothing fancy. A little stunt inside man coverage with two deep safeties. Interception.

There were a lot of other interesting plays to look at, but I chose these two defensive plays. I could have looked at the terrific screen play call early in the game, or what the Giants offense did differently this week (hint didn't drop every pass, and created better separation at the line of scrimmage).