The Giants are still leading the NFC East, but they have a tough schedule the rest of the way. We take a closer look.

The New York Giants are officially on their bye week for Week 11. So far this November they have followed their tradition of stinkin' it up and haven't won a game yet this month. After two ugly losses in a row to the Pittsburgh Steelers and Cincinnati Bengals, maybe the bye week came at a good time for them. Who knows?

According to Blogging the bEast, the Giants' remaining schedule is among the NFL's toughest: 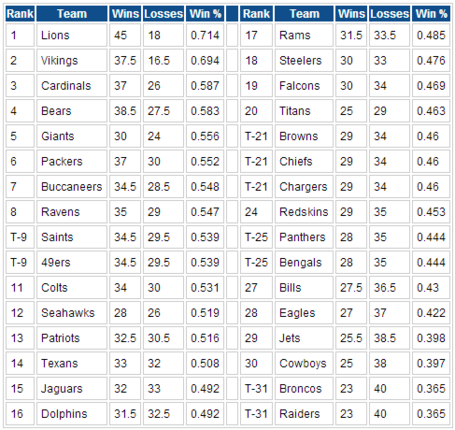 We all saw it coming once the schedule broke earlier in the year, and the way these guys played in the last few weeks, it certainly doesn't give you a good feeling in your stomach. Basically, the division and/or playoff berth is likely going to come down to the wire for the second year in a row.

Here is a look at the schedule once they return from their bye-week:

The Giants do have one more game in this cursed month of November and it's against the NFC North Green Bay Packers. The Giants faced the Packers twice last year, once during the regular season where they lost a nail-biter, 38-35, and the other where they knocked the Packers out of the playoffs in the second round at Green Bay. After a shaky start to the season, Aaron Rodgers has seemed to find a rhythm for his offense again and is looking more like the quarterback he was a year ago. Two of the Packers big weapons are battling injuries right now. Wide receiver Jordy Nelson missed a game a three weeks ago with a hamstring injury and he also suffered an ankle injury two weeks ago. Linebacker Clay Matthews is missing his second game in a row this week due to a hamstring injury. If these injuries continue to ail the Packers, the Giants have an advantage, as the Packers defense does struggle, even if Matthews is playing. The Packers and Giants tend to put on a good game, so it will be close.

The Monday Night Football game against the Redskins is one of the two remaining NFC East games the Giants have left. We all remember how the last meeting with Washington went. The offense did work, but the defense struggled against Robert Griffin III and gave up a lot of yards. The Giants were able to win the game in the final 1:30 when Eli Manning found Victor Cruz in the slot and threw the game winning 77-yard touchdown pass. It's imperative that the Giants don't play defense they way they played in that game. They need to be strong from beginning to end and the pass rush needs to keep RGIII from moving in and out of the pocket. The offense will do its work, even if DeAngelo Hall is still bitter about the Cruz touchdown.

This, I believe, will the the absolute toughest game the Giants will face in the remaining schedule. Doesn't matter what the current Saints record is, they are always a tough opponent. Drew Brees is a nightmare for opposing defenses and will find a way to the endzone in most of his drives. This game will depend on a both defenses. The Giants have to be on their absolute best if they want to stop Brees from throwing the ball deep and need to put a body on Jimmy Graham. The Saints defense has also been weak this season and the Giants will need to take advantage of that.

The Falcons started the season strong with an 8-0 record and took their first loss last week against the Saints. Quarterback Matt Ryan is having one of the best seasons of his career and he has utilized some of his best targets in Tony Gonzalez and Julio Jones. The last time the Giants faced the Falcons was earlier this year in the NFC Wildcard game. The Giants embarrassed the Falcons defeating them 24-2 and knocked them out of the playoffs. Falcons wide receiver Roddy White took a jab at Cruz before that game and he took some more jabs at him earlier this season saying that Cruz "is more of a slot receiver. Big boys play on the outside." Cruz will need to be on his best this game if he wants to remind White that big boys also have Super Bowl rings.

At the start of the season, I thought maybe this would be the toughest part of the final month this season. However, considering the shape the Ravens are in, it will still be a tough game, but the Giants have the edge health wise. The Ravens lost two of their defensive studs in Ray Lewis and Ladarius Webb. As far as production goes, Ray Rice has been up and down. One week he plays like a top running back, and then he'll have a game like Week 10 where the Ravens score 55 points and all he gets is 35 rushing yards. Quarterback Joe Flacco has had a solid year and has led his team to a 7-2 record. For the Ravens to win, Rice and Flacco will have to be on their best. For the Giants to win, the defense will need to stop the running game.

Sunday 12/30, 1 p.m. vs. Philadelphia Eagles
To wrap up the season the Giants will play their final division game against the Eagles. The Giants took a heart-breaking 19-17 loss to the Eagles Week 4 when a lot of questionable plays were made in the final minute that forced Lawrence Tynes to kick a missed field goal further away than he should have. The Eagles since then, though, have become quite an inept team. Michael Vick currently has a concussion that he suffered last week against the Cowboys. He could return by then, but knowing Vick and his injuries it's always a question mark. No matter the situation though, it's still a division game and division opponents always play their tougher games when facing each other. It could turn into a situation where the Giants are fighting to get in the playoffs like last year, or (hopefully) the game won't matter at this point. If it does matter...they should be OK, as they do tend to play their best football when their backs are against the wall.

Sunday, 11/18 vs. Cleveland Browns
I may be getting my hopes up for a win by the Browns, but there would really have to be something terribly wrong with the Cowboys if they can't win this one.

Thursday, 11/22 vs. Washington Redskins
The Cowboys have a short week here and they have to face Robert Griffin III for the first time on Thanksgiving Day. Even in some of the Redskins bad losses, RGIII has given opposing defenses a tough time. It will be interesting to see what the Cowboys do here to adjust.

Sunday, 12/02 vs. Philadelphia Eagles
This game will depend on the health of Vick and the situation of the Eagles. Either way, even if they are out of playoff contention, they don't want to lose to a division opponent. If they're going down, they're going to try and take everyone else down with them.

Sunday, 12/9 at Cincinnati Bengals
The Bengals have had a season of highs and lows and I'm sure they'll still be battling for a playoff spot here. They'll play their hearts out and give the Cowboys a tough time, much like they did to the Giants.

Sunday, 12/16 vs. Pittsburgh Steelers
This game kind of worries me because of the current situation with Ben Roethlisberger. In Week 10 he suffered a separated shoulder and an apparent rib injury that doctors fear could puncture his aorta if he plays. Byron Leftwich is taking over quarterback duties this week against the Ravens. Whether or not Roethlisberger is healthy enough to play against the Cowboys, they will likely be fighting the Ravens for the division at this point.

Sunday, 12/23 vs. New Orleans Saints
Like mentioned earlier, Brees is a nightmare for opposing defenses, and he's going to give the Cowboys a hard time.

Sunday, 12/30 at Washington Redskins
They face the Redskins twice in the last few weeks. The Cowboys I believe will split this series, but it won't be easy. These should be interesting games.

The Cowboys will have to rely on numerous things to avoid a December implosion: Tony Romo being solid, Dez Bryant running correct routes and catching the football, and the defense holding up. These things have plagued them in the past during the last few weeks. However, as always, you can never predict the NFC East. We'll all just hold our breaths and watch.

But for now, since the Giants are on a bye, go Browns!