Blue 22: Breaking down the 56-yard touchdown pass to A.J. Green

Share All sharing options for: Blue 22: Breaking down the 56-yard touchdown pass to A.J. Green

What is the best $70 dollar purchase I've ever made? It's easily the NFL Game Rewind package which includes three versions of every game. The full broadcast version with no commercials, the condensed version (every single play in the game right at the snap--you can watch the whole game in no more than half an hour), and the All-22 review.

My day work has died down some so I'm hoping to introduce a new weekly feature, I'll call "Blue 22" where I highlight some things you can see on the All-22.

Today'splay will be the first wide open A.J. Green touchdown. Let's see if this was Perry Fewell's fault, the defense, or a combination of both. 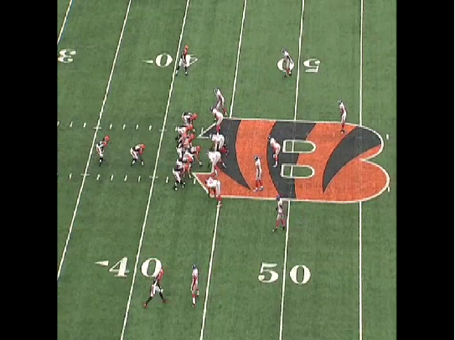 Here is the initial look at the play.

The Bengals open up with two wide receivers, a tight end and two running backs. 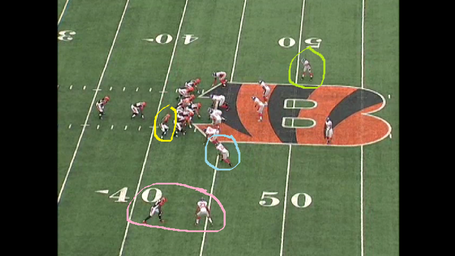 They send a player in motion (circled in yellow) above and stack him behind the right tackle. Prince Amukamara now has no man coverage responsibility on his side of the field and drops back off the line of scrimmage (he becomes a safety on this play). Circled in green. While Antrel Rolle will move up to play in the box. Webster is out with A.J. Green in pink. 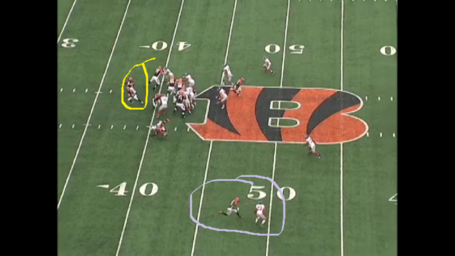 Circled in yellow in image No. 3 is Andy Dalton's play fake to Ben Jarvis Green Ellis. notice (in purple) Webster is still in good position against Green. Stevie Brown (not circled) is leaning towards the run action, but has not been beaten yet. Take a look at the tight end running up the middle of the seam, splitting the linebackers and Prince Amukamara. 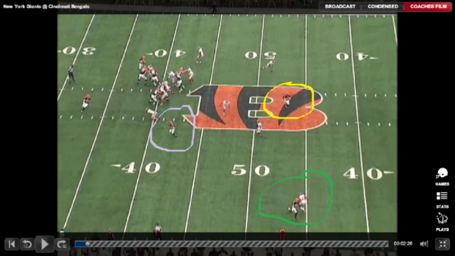 Here is the fourth image in the series. Dalton has completed the play fake and rolled out to the right. Webster is still in decent position on Green (but is about to lose that position). Brown is not circled, but is standing right in the middle of the B on the 50-yard line. Hey, look at the guy circled in yellow! He's five yards behind the defense down the middle of the field as Amukamara has finally noticed and has turned around to chase him . Circled in blue is another open receiver. 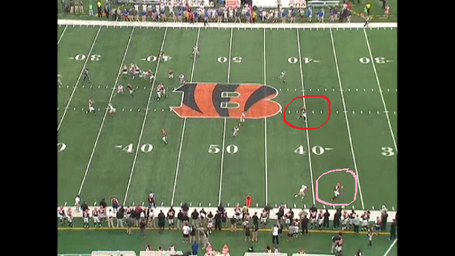 Webster gets beat, and the touchdown pass goes to Green. Notice again in red, the player now has a good 10 yards of separation on all other players and also would have had an easy touchdown. He's actually MORE open than Green is on this play.

I'm confident that there is no play call in Fewell's defense that says "cover nobody". This play, without knowing the play call, looks to me like a case of everyone, but Webster getting beat on the run-fake. Everyone looks like they know what they were supposed to do on the play, they just got out of position by the strong Bengals play-action. Amukamara was looking in the backfield and let the tight end run right down the seam, as did the linebackers. Brown bit on the play fake, and/or decided to cover the guy coming out of the flat because as you can see in image No. 4 -- no one else is covering that man, either. Green is one of two options for an easy touchdown on this play and gave Bengals confidence early that they could hang with the champs.

I also saw this interesting stat from the Newark Star Ledger's Jenny Vrentas:

The Giants are having trouble defensively regardless of the formations they are in, and it's going to be up to the individual players on defense to play better.

Let me know if there are any other plays you want to see the All-22 film for and maybe I'll be able to break it down.