David Diehl or Sean Locklear: Who should be playing right tackle?

Share All sharing options for: David Diehl or Sean Locklear: Who should be playing right tackle?

David Diehl has been an object of scorn amongst New York Giants' fans for years now. That vitriol has never been louder, or more vicious, than it is right now in the wake of an awful 31-13 loss to the Cincinnati Bengals during which the Giants' offensive line surrendered a season-worst four sacks of quarterback Eli Manning.

Is the ridicule of Diehl justified? Let's take a look.

Manning threw 46 passes on Sunday against Cincinnati. In addition to those four sacks, Pro Football Focus says he was hit three times and hurried 11. Diehl was responsible, according to PFF, for one of those sacks and three of the 11 hurries.

Here is the rub, though. Like many of you I thought while watching the game live that the veteran right tackle had been a sieve and that he was responsible for many more hurries than that. When the PFF grades came out, Diehl scored a +1.3 for the game, the second-best score among any Giants' offensive player on Sunday.

I re-watched the game Monday thanks to 'NFL Game Pass,' and you know what? PFF is right. I counted two hurries and two sacks that could be pinned on Diehl, but we're splitting hairs. Diehl's work was not the biggest issue on the offensive line against the Bengals. Kevin Boothe could not handle Geno Atkins. Chris Snee had a rough day. Will Beatty didn't grade well, according to PFF, although I disagree -- which is a different story we aren't getting into.

We are here to talk about Diehl, the 10-year veteran who fans have been hoping to be rid of for several seasons now.

Here is the central question -- and the one I know most of you already have formed your answer to. Does Diehl belong in the starting lineup, or should Sean Locklear be the Giants' right tackle? 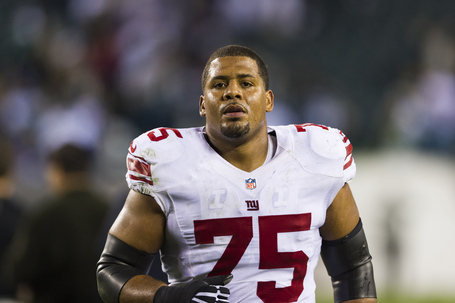 Here are the raw numbers from Pro Football Focus:

In terms of pass-blocking, that averages out to one pressure every 21.2 snaps. The run-blocking grade is, obviously, not what you would like it to be.

By the same measure we looked at with Locklear, that equals one pressure every 14 snaps. Considering Diehl has played less than half the snaps Locklear has, the run grades pretty much cancel out.

Diehl suffered a knee injury in Week 2 against the Tampa Bay Buccaneers and did not start again until Week 9 vs. the Pittsburgh Steelers.

Only the Denver Broncos and Houston Texans, with 11, have surrendered fewer quarterback sacks than the 13 allowed by the Giants this season. Six of those, however, have come since the Giants made the decision to re-insert Diehl into the starting lineup and bench Locklear, the journeyman signed in the offseason.

It was a move you knew the Giants would make eventually, given their history of loyalty to veteran players during the Tom Coughlin era as head coach. Diehl has been a starter for two Super Bowl teams and has moved from position to position over the years without complaint. He has Coughlin's respect, and his trust.

The move back to Diehl is also one the coaching staff defends. Offensive line coach Pat Flaherty said this week that Diehl will be "just fine" at right tackle.

"You would love to say it’s this one thing or one person or one aspect, but it doesn’t work out that way. Believe me when I tell you this, it’s all of us. We all have to do better," Gilbride said. "Sometimes it’s (Eli) trying to force the ball because he’s trying to make a play to get us going, sometimes it’s the protection, just not being quite as solid as it needs to be. Sometimes it’s the receivers, sometimes it’s the call that’s not the best call for that defense. It’s everything."

This is what you would expect the Giants' coaching staff to say. No way would you expect them to, or want them to, single out a player in public and say the problems are his fault. And in this case that might even be somewhat true, as the numbers indicate Diehl played fairly well against the Bengals.

Replacing Diehl with Locklear at this point would not be a cure-all for everything that ails the Giants' offense. It might not even be fair since the Giants did decide to give the job back to Diehl, and since the numbers and the film seem to show he did a pretty good job Sunday.

Still, the results indicate that individually this season Locklear has outperformed Diehl, even though it is clear neither of them is playing at what might be considered an elite level. They also seem to indicate that the line as a unit has played better with Locklear starting instead of Diehl. Though, to be fair, the week-to-week health and performances of other players has something to do with that.

The 'players don't lose their jobs because of injury' philosophy is an admirable one, and correct. Ultimately, though, the best players are the ones who should be playing.

No offense to Diehl, but right now I believe that means Locklear is the one who should be playing.