Jesse Bartolis takes an in-depth look at the Pittsburgh Steelers as the New York Giants get ready to face them this Sunday.

The story lines are well documented, Ben Roethlisberger and Eli Manning were drafted in the 2004 NFL draft and have seen unparalleled success in the since they entered the league, winning a combined four Super Bowls and appearing in five. Both teams are historic franchises with well-respected ownership and terrific coaches, but these teams are not your fathers Pittsburgh Steelers and New York Giants.

These are big-play offenses and vulnerable defenses, and Sunday's game very likely will be a different game than the last time they meant when it took a safety for the Giants to get a victory over the Steelers in a low-scoring affair.

I'm back at the Beyond the Box Score this week though I'm combining it with my weekly Scouting Report this time. I first want to take a look back at the film before I see what the raw numbers say.

I went back and watched the Steelers game vs. the Bengals from Week 7 because the Bengals have some similarities to the Giants and the Giants also play the Bengals next week, so it was kind of a two birds with one stone thing. The Bengals run a 4-3 base defense, and like to rush four and drop seven into coverage while occasionally mixing in blitzes, and that is because they have a pretty good stable of pass rushers (the best one is defensive tackle Geno Atkins), the Bengals have a top wide receiver who requires double coverage, and they also have been having some issues at cornerback. 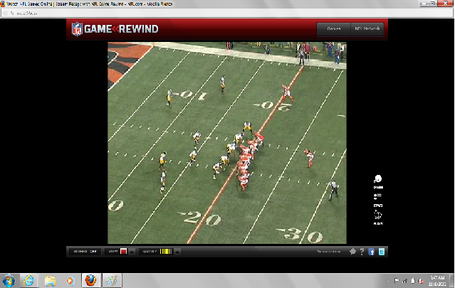 This is the pre-snap look. 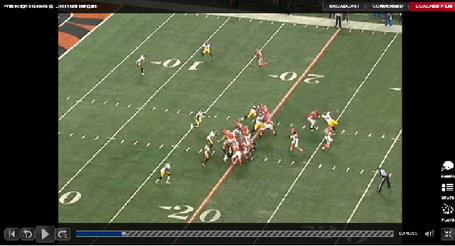 This is the play in action. You can see the big hole that's opened up and it's the running back (BenJarvus Green Ellis) on the defender one on one. This was an easy four-yard gain.

A couple of plays later. Here is the pre-snap look.

And the designed run, again the Bengals chose to run to the right side of the line, which is a common theme for them in this game (and where they had the most success). 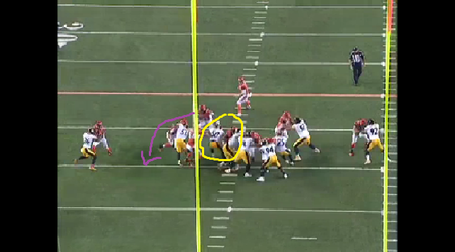 Larry Foote (circled in yellow) actually beats his man to the inside, but there is a huge gap which Green Ellis is able to shoot through (purple arrow) to take it down tot he six yard line. Cornerback Ike Taylor has to come in and make the save. Green Ellis is not really what you would call a speedy back and that allows Taylor to get over and make the play. The other thing you also noticed is how good and fast Lawrence Timmons is (No. 94, not circled) even though he's engaged here at the start of the play he sheds that and meets Green-Ellis shortly after Taylor does down the field.

The Bengals did themselves a disservice in this game, they ran the ball eight times on the opening drive and scored a touchdown, but only rushed 12 more times in the game. There is room to run on this Steelers' defense, especially when Troy Polamalu doesn't play.

The run helps out. This is the Bengals second touchdown score on a simple play action.

Pre-snap look. Again the Bengals go to a heavy base set with A.J. Green on the bottom right.

Here is the snap (below) and the play action. Notice Ike Taylor gives A.J. Green an inside release to protect the fade (in black), but the safety is caught in no man's land. 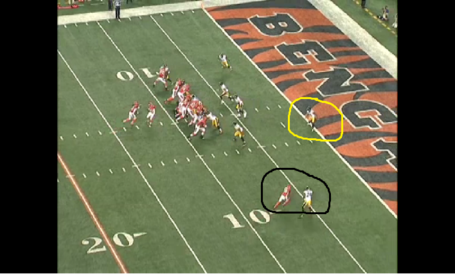 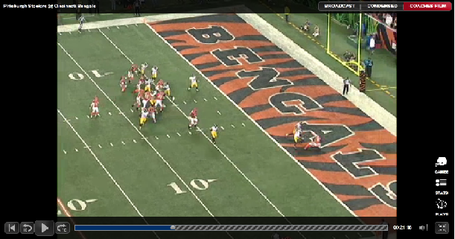 The numbers say this is a still stingy defense, but I don''t think it is as good as it has been recently. I don't think they make any big plays, and I think they are vulnerable on defense in the run game and in the pass game, but we'll have to wait and see on Sunday.

Furthermore, on one play in the game the Steelers ran what appeared to be a wide receiver screen, but it was something different. Here's that play.

The Steelers sent Miller (circled in yellow) in motion to set up another wide receiver screen to Antonio Brown. 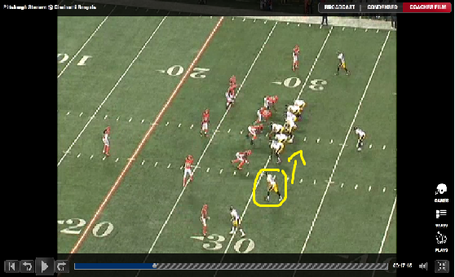 Then Big Ben throws the ball to Antonio Brown (circled in yellow) the pass behind the line of scrimmage, which looks like a beautiful screen. Notice the defense flowing towards Brown. 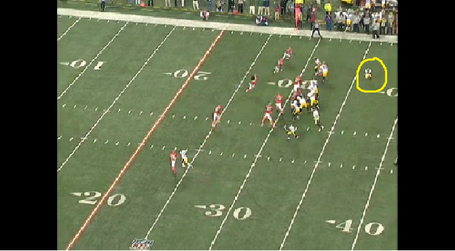 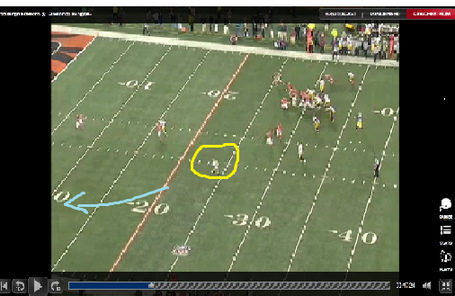 Baron Batch (circled in yellow) drops a perfectly thrown pass by Brown that would have led to a touchdown. Two plays later Big Ben is intercepted on a pass intended for tight end Heath Miller.

Wallace had the dropsies in this game, he had three or four drops including one in the end-zone when he was wide open for a touchdown.

Running back Jonathan Dwyer has been a revelation, he's a big guy and he gets north and south in a hurry and has pretty good speed for a bigger dude. He's not elusive by any means, but he'll run right through arm tackles.

There were a few plays in the game where I'm convinced Roethlisberger didn't notice a free blitzer coming, but he happened to be getting rid of the ball quickly on the play anyway, that is something to watch out for in this game.

In the second quarter the Steelers scored a touchdown (after two previous field goals) to give them 12 points to the Bengals 14. They went for the two point conversion. I can say with confidence Tom Coughlin would never do that. Mike Tomlin can be very aggressive.

Roethlisberger looks for Heath Miller in the red-zone, and he's good there.

The Steelers running game has been improving over the past few weeks.

The thing you need to know about this offense is that Pittsburgh has tremendous speed at wide receiver and the Steelers are looking to get the ball to Antonio Brown in space, and he can make things happen.

This offense also plays less vertical than they have in year's past, but with that comes more high percentage passes, less sacks, and less turnovers, but don't be lulled to sleep because Mike Wallace can still get vertical in a hurry.

This is a very good offense.

Rookie Chris Rainey returns kick and has terrific speed. He's built more like Darren Sproles than he is David Wilson but has similar explosion.

The Steelers kick coverage team leaves a lot to be desired. Bengals kick return man Brandon Tate had plenty of room to make plays on kick offs, this could be a good week for David Wilson.