It is time for this week's New York Giants roster power rankings, where we rank the players on the active roster from 1-53.

The results are cumulative and based mostly on this season's body of work. A player's past accomplishments are also weighed into their ranking, but the most important factor is the overall contribution to this season's Giants' team. The deeper we get into the season the more difficult it is not to overreact to one performance or one or two plays.

Read on and see how you think I did this week.

3. Ahmad Bradshaw -- Just when some scribes were starting to wonder how much gas he had left in the tank (OK, I was starting to wonder) he comes up with the defining performance of his career. Pro Football Focus said 70 of Bradshaw's 200 yards rushing came after contact, which is a testament to how hard he ran against the Cleveland Browns. LW: 12

4. Will Beatty -- Amazed that Beatty is this high? I am, too. Part of that is that Beatty has been rock at left tackle since returning to the lineup, earning a +10.2 grade from Pro Football Focus. The other part of that is that after the awful defense the Giants played the last two week there is no way any defensive player deserves to be this high. Beatty, incidentally, has yet to allow a quarterback hit, or even a hurry. LW: 8

5. Jason Pierre-Paul -- I am only grudgingly putting Pierre-Paul this high. He said before the Cleveland game that he wasn't having any fun. Well, it's not much fun watching him plow straight ahead and get stoned at the line of scrimmage, either. The Giants need more than what they have gotten from JPP lately. LW: 3

6. Antrel Rolle -- As usual, it sort of bugs me to put him this high. But, I can't find a reason to really drop him lower. Or, anyone who absolutely has to be pushed above him. LW: 5

7. Martellus Bennett -- Count me among those that was impressed by Bennett's courage on Sunday, playing much of the game with a hyper-extended knee and blocking well enough to help the Giants have their best day running the ball in two years. This guy is en route to earning himself a big contract. LW: 16

8. Chris Snee -- Playing very well, and the Giants' offensive line is playing as well as it has in a long, long time. LW: 10

9. Linval Joseph -- You guys have been calling for it, and even though Sunday wasn't his best game I don't think I can keep him out of the top 10. LW: 13

10. Rocky Bernard -- They say absence makes the heart grow fonder. He drops one spot, which isn't nearly as much as he might have after not playing Sunday. Bernard has been terrific this season, and the Giants' really missed the big defensive tackle against the Browns. LW: 9

11. Sean Locklear -- Might just be turning David Diehl into a reserve. LW: 11

17. Henry Hynoski -- Got a +1.9 from Pro Football Focus for run-blocking on Sunday. He is turning into a devastating lead blocker. LW: 19

20. Osi Umemyiora -- At least he got somewhat near Brandon Weeden on Sunday. LW: 25

21. Chase Blackburn -- He gets no blame for the 62-yard touchdown pass to Josh Gordon, but Pro Football Focus has him for three missed tackles on Sunday. That doesn't count the times he wasn't athletic enough to get to Trent Richardson. His grade for the week was -4.9, worst on the defensive unit. Many more games last this and there will be calls for Mark Herzlich. LW: 17

22. Stevie Brown -- Two game-changing plays on Sunday. He has suddenly become very important to the Giants. He jumps ahead of Corey Webster and Prince Amukamara simply because neither of those guys has made the types of plays Brown made on Sunday. LW: 34 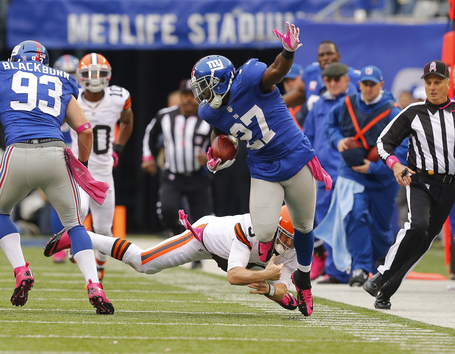 23. Corey Webster -- The Giants need for Webster to move up this list, but right now I can't put him higher. LW: 24

24. Prince Amukamara -- He and Webster are pretty much even at this point. LW: 21

25. David Wilson -- I know, I know. How can he move down after a 40-yard touchdown run? This is a weird circumstance. When I think about overall contribution, though, it's difficult for me to move him above Webster and Amukamara, who are playing every down on defense. Wilson played two snaps. LW: 23

27. Lawrence Tynes -- The problem on Sunday was not his kickoffs. The problem was the guy catching them is one of the best returners in the business. LW: 15

33. Markus Kuhn -- I can't believe I have Kuhn ranked ahead of Mathias Kiwanuka. At least you notice the guy once in a while during games. LW: 37

34. Mathias Kiwanuka -- There is a guy playing for the Giants and wearing No. 94. That used to be Kiwanuka, an impact player the Giants could use in a number of different ways. Anybody know what happened to that guy? LW: 32

37. Jayron Hosley -- Remember when he was starting opposite Corey Webster? Seems like a looooong time ago. LW: 29

39. Marvin Austin -- Moves up only because he actually played 24 snaps on Sunday due to the injury to Rocky Bernard. Austin still has a long way to go after missing more than two full seasons. LW: 49

40. Mark Herzlich -- Moves up this week simply because of the spectacular hustle play he made to prevent a touchdown on Josh Cribbs' 74-yard kickoff return in the third quarter. If Chase Blackburn continues to miss tackles and the Giants' run defense continues to be sieve-like, how long before the calls for Herzlich to take over at middle linebacker begin? LW: 48

41. Justin Tryon -- He is up a couple of spots only because other guys really needed to be moved down. His play was of no impact Sunday. LW: 44

42. Michael Coe -- Did not play any defensive snaps, and only had seven plays on special teams. LW: 45

43. Adrian Tracy -- Actually got a few defensive snaps Sunday, but didn't do anything with them. LW: 40

44. James Brewer -- Do we really want to know when 'Next Man Up' will mean it's Brewer's turn? Not the way the offensive line is playing right now. LW: 44

46. Da'Rel Scott -- Never a thought of giving him any snaps when Andre Brown went down. LW: 39

49. Keith Rivers -- Will this guy ever get back on the field? Will there be a role for him if and when that happens? Now we know why Cincinnati Bengals' fans were frustrated with the guy. LW: 42

50. Mitch Petrus -- Would have started if Chris Snee had been unable to play. LW: 50

51. Adrien Robinson -- Active Sunday due to all the injuries the Giants had, but offered no real reason to move him very far. LW: 52

52. Adewale Ojomo -- Active Sunday. Moves up, though, only because of Sash being added to the roster.

53. Tyler Sash -- First week on the roster. He starts at the bottom. LW: Unranked