Chase Blackburn is entrenched as the Giants middle linebacker despite the desire of many fans to see Mark Herzlich take over that role.

Share All sharing options for: Chase Blackburn: Helping or hurting the Giants' defense?

One of the most polarizing topics regarding the New York Giants these days revolves around the performance of middle linebacker Chase Blackburn.

Is Blackburn's perceived lack of athleticism and ability physically dominate the line of scrimmage killing the Giants, especially in run defense?

How long is Blackburn going to keep the middle linebacker seat warm for Mark Herzlich, anyway?

Traditional statistics tell us that Blackburn actually leads the Giants in tackles with 42. He has two sacks, two forced fumbles (both Sunday vs. the Washington Redskins) and an interception. So, those raw numbers are not bad.

Pro Football Focus, though, would have us believe that Blackburn is the weak link in the Giants' defense. He is, by far, the lowest-graded player in the PFF +/- system, with a score of -14.7 for season, including what looks like an awful -11.2 score vs. the run.

For a further reference, that -14.7 score gives Blackburn the second-lowest PFF grade among linebackers in the league. Only Cincinnati's Rey Maualuga (-15.7) is worse overall. No inside linebacker in the NFL has a lower score against the run.

So, why haven't the Giants turned to Herzlich at middle linebacker already?

Giants' coaches talk constantly about Blackburn's intelligence, his ability to quarterback the defense, to get teammates into the proper spots and to diagnose plays and put himself in the right spot -- even if you watch and believe that Blackburn's athleticism sometimes betrays him.

Head coach Tom Coughlin talked about those things again on Monday, admitting that Blackburn is "most difficult" to get out of the lineup.

"You watch the guy play, he's always talking, moving, always making sure that he communicates with his teammates," Coughlin said. "Always trying to put people in the right spots, always coming up, it seems, in those situations where he can be a factor in a play even if it's as you say, not the original. He comes to try and make something happen to the ball."

Why is Blackburn, PFF grade and the Giants' obvious struggles in run defense at times this season notwithstanding, still the middle linebacker? Think back to last season.

The Giants did not offer Blackburn a contract at the start of the season -- and neither did anyone else. Jonathan Goff was the starting middle linebacker and general manager Jerry Reese had brought in an impressive array of young linebackers to learn and -- eventually -- take over.

Goff got hurt right before the season opener, leaving a natural opening to re-sign Blackburn. The Giants passed, instead opting for the potential of rookie sixth-round pick Greg Jones. That was a disaster. They tried Herzlich. He did OK in two games, but got hurt.

Through all of that the Giants had Michael Boley and safety Deon Grant trying -- without real success -- to call the defense and get players lined up. Confusion reigned and it seemed no one on the Giants' defense, including defensive coordinator Perry Fewell, knew how to fix it.

When Herzlich got hurt the Giants finally summoned Blackburn off his couch. With no practice he stepped right into the lineup, helped a confused group settle down and was a huge part of the reason why the defense played so well en route to the Super Bowl title. 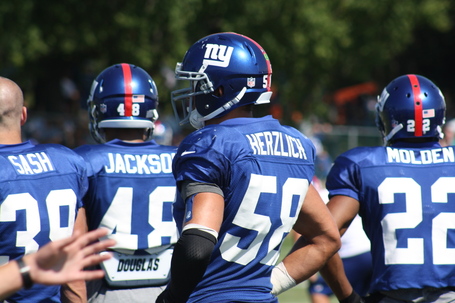 If you were scouting both Blackburn and Herzlich as NFL Draft prospects, you would undoubtedly take Herzlich first. He is more athletic, probably more physical at the point of attack and probably a more punishing tackler. The Giants, though, still trust Blackburn's ability to make sure both he and the defense do the right thing.

"Mark has learned a lot from Chase," Coughlin said. "I think Mark will be a good middle backer going forward because he's learning from a good one."

The funny part about the Giants now leaning on Blackburn is how long they shied away from him, and how obvious they made it that they saw the same limitations that fans now scream about.

When Antonio Pierce was injured in 2008 the Giants turned to Blackburn for a few games -- but only until they could get the untested Goff ready to play.

In 2010 the Giants drafted middle linebacker Phillip Dillard, ostensibly to push Blackburn out the door.

In 2011, the Giants did push Blackburn out the door. They drafted Jones and Jacquian Williams and brought in free agents Herzlich and Spencer Paysinger.

So, don't kid yourself. The Giants understand what they have -- and don't have -- with Blackburn quarterbacking the defense.

Right now, they obviously believe all of the intangible things outweigh any physical limitations.

Considering how much success they have enjoyed since Blackburn got up off his couch and put on the No. 93 jersey that is hard to argue with.