Share All sharing options for: Beyond the Box Score: San Francisco 49ers

Time for another addition of Beyond the Box Score. For this week, I have another opponent that I have become familiar with throughout the season before I even went back to the tape. I viewed the 49ers and Bills game in entirety last week (my wife is a Bills fan) and I watched what I could bear of the 49ers and Jets game two weeks ago.

Let's go beyond the Box Score for the 49ers and Bills. And then I'll look at the 49ers and Vikings game to see what the Vikings did that worked with the 49ers.

You know how sometimes you see a lopsided score, but you know that might no be entirely indicative of what happened in he game? This was not the case in this game. If anything the 45-3 score might have been an understatement to how poorly the Bills played.

The 49ers were also able to throw the ball deep to Vernon Davis and make Michael Crabtree look like a top 10 pick or something (oh wait, he was?).

This was a major arse kicking.

The 49ers really dug deep into their running back rotation by using Frank Gore, Kendall Hunter, and Antonio Dixon effectively. Dixon really came in late in the game. The 49ers had a few designed runs for Alex Smith. He is very mobile; his speed is often underrated, they like to use Colin Kaepernick as a wildcat quarterback as well. And he has wheels, right now he might be a better option quarterback option than Tim Tebow.

The 49ers held the ball for more than 36 minutes.

If there was any solace to take from this game it's that the Bills terrific offensive line was dismantled prior to this game with two injuries (Cordy Glenn and Kraig Ubraik) and then saw another injury in the game. Brad Smith also had a nice 36-yard run so it is possible to run for more than 20 yards against the 49ers.

When the 49ers were on offense

I've heard of helping a running back get some extra yardage, but check out this play to get a first down. 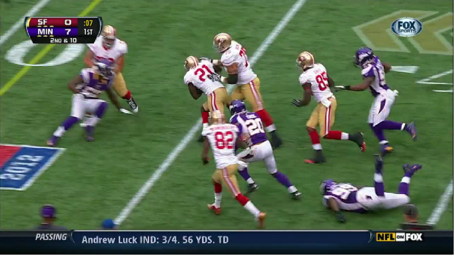 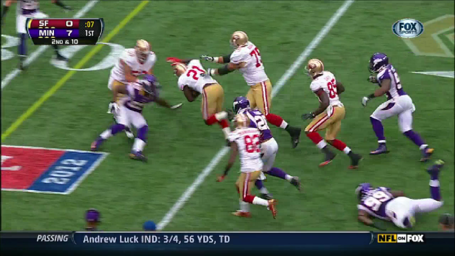 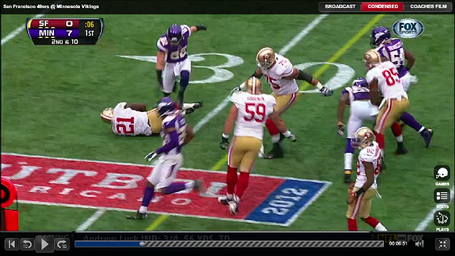 First Down! This has nothing to do with the strategy, I just enjoyed it.

Here is something to do with strategy though. Here is a formation the 49ers like to run a lot. 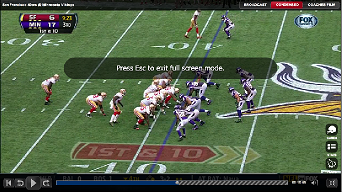 They stack a tight end (usually Dealnie Walker) behind another tight end (Vernon Davis) , but in front of a full back. Then they'll pitch, or hand the ball to Gore to that side. That's the thing about good running teams: sometimes it's not about out smarting the other team, it's about running right through them. In this formation you have to watch out for the naked bootleg where Smith can take of running to the weak side for a big gain as well, and of course play action to throw the ball down the field.

The 49ers have one of the most versatile second tight ends in the league.

I'm sorry 49ers fans, I was reading through the Ask a Niners Fan thread and I just don't see it from Alex Smith. The difference to me, between Alex Smith now and two years ago is he's well coached. The 49ers have a terrific run game and the coaching staff lets Smith do a lot of bootlegs and play action passes. He doesn't do a great job going through progressions and he doesn't do a great job attacking down the field.

(And now to make some 49ers fans angry). If I took Alex Smith and Mark Sanchez nd switched them from one team to the other where Smith ended up with the awful Jets running game and their poorly constructed offense, and with the Jets abysmal "talents" at the skill positions I don't think we would even consider Smith anything more than average.

Likewise, if you let Sanchez work away from Tebow and Rex Ryan (who I believe is stunting Sanchez's growth) and the extremely well coached offense of the 49ers, you would see similar performances from Sanchez..

Why do I say that? Well, Smith is a three-step drop and fire kind of quarterback. The 49ers like to run naked bootleg, and more short pass. He'll take shots down field to Vernon Davis on occasion, but I don't think he takes command of an offense like the elite players in the league do, or even the second tier guys.

That does not mean this offense is not good, because like I said they don't make mistakes, their well-coached and they can really beat you down up front, and they can score some points. Alex Smith can put points up in THIS offense.

To me, Smith is just much better staying out of the way now, or "managing the game" a term everyone hates Just an honest opinion.

I was thinking to myself, man the 49ers haven't really had any penalties. This was late in the third quarter when the 49ers were trailing 17-14. Then on that drive they had two personal foul penalties, and a five yard holding penalty resulting in an automatic first down. Which lead to this touchdown. 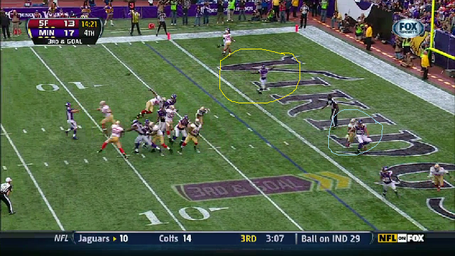 See the guy circled in yellow (Adrian Peterson) he didn't get the touchdown. Instead Ponder lobbed a pass to the guy circled in blue (Kyle Rudolph) who had to make a one handed catch behind Donte Whitner. There is some room for plays to be made in the passing game to the running back.

Justin Smith isn't making a lot of plays, but his presence is being felt. I didn't focus on him every play, I would say about 20 or so and he was probably doubled on at least 15 of those.

The 49ers defense doesn't miss many tackles, they are one of the few teams in the league that I can say that with confidence.

The 49ers have a terrific defense, but I think their weakness is in the secondary where there are plays to be made, provided a quarterback can find the time to make the plays (which doesn't happen very often).

Kicker David Akers is very good as well and it seems like never misses against the Giants. Kyle Williams is the main return man on both punts and kickoffs, but Ted Ginn Jr. gets some opportunities as well.

I think this a very difficult game for the Giants to win. The 49ers have a powerful running game and can make some plays in the passing game. his is not a dynamic offense, but it can score points, so far they have played the defenses of the Packers, Lions, Vikings, Jets, and Bills. The only defense in that group that has been any good this year is the Vikings defense, and the 49ers struggled in that game. That does not mean anything, but I think the offensive numbers are misleading.