Last year the San Francisco 49ers were among the league leaders in defense (fourth in yards allowed) and special teams (with their punter and kicker getting Pro Bowl nods for special teams), but lacking on offense. In order to rectify that the 49ers spent a lot of resources on offense in the off-season. They signed wide receivers Mario Manningham and Randy Moss, running back Brandon Jacobs and then focused on offensive players early in the draft. Wide receiver A.J. Jenkins (first round), running back LaMichael James (second round), and guard Joe Looney (fourth round). Has it paid off? Let's take a look at the numbers.

The 49ers are not considered a high-powered offense, but so far this year they have been impressive -- averaging nearly 30 points per game and a ridiculous 6.1 yards per rush. I know the Giants want to be a balanced team, but look at the rush attempts per game. The 49ers rush the ball a ton and the Giants are near the bottom of the league in rush attempts. Running the football is a mentality. The Giants are better at it so far this year, but Eli Manning is so good now this team will most likely not ever return to a rushing mentality with Manning at the helm.

Giants fans like to complain that the coaching staff doesn't like to play rookies early. Well here are the stats for the 49ers first two draft picks. Zero all around!!! The team has yet to activate James or Jenkins in any game this season.

Another stat the sticks out-- Alex Smith and Colin Kaepernick have combined for 28 rushes this year.

Manningham didn't want to be the third option on the Giants anymore and went to the 49ers to be ... the third option. He currently has the third-most receptions on the team behind Michael Crabtree and Vernon Davis.

David Akers has missed three field goals of more than 40 yards this year. He never misses against the Giants though, so don't worry!

The 49ers are an impressive offense on paper. 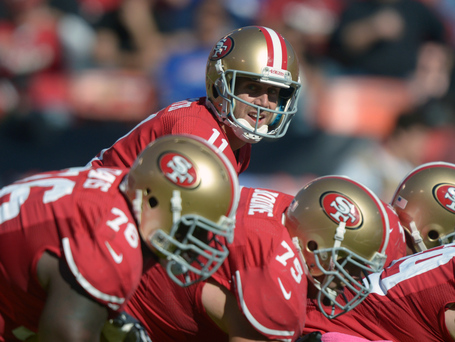 These will probably be some frightening numbers for Giants fans'. Terrifying because the 49ers' defense is dominant.

The 49ers are not that good. Second in yards per game? For shame. Obviously the team is very talented on defense. Their opponents this year have been Green Bay, Detroit, Minnesota, New York Jets, Buffalo. I just mention this because it's a quirk that they have yet to face a NFC West team and they still have these impressive defensive numbers. They might set some all-time records after they smack around the Cardinals, Rams, and Seahawks six times.

The number that really sticks out to me are the sack numbers for both defenses. The 49ers really beat up the quarterback last year, but they seem to be struggling just as much as the Giants are this year in that aspect.

Aldon Smith leads the team in sacks with 4.5, Justin Smith who was dominant last year has yet to register a sack. The 49ers have not really created a ton of turnovers this year. The defense, statistically speaking, is not making a lot of big plays.

Andy Lee is averaging 47.5 yards per punt and has pinned nine inside the 20-yard line. This guy is terrific. Ted Ginn Jr. and Kyle Williams are sharing punt return duties, though neither has gone over 20 yards on any punt return. Kendall Hunter and Williams are returning kicks, with Williams averaging 35.7 yards per return.

This is an impressive team with the statistics to back it up. And a tough matchup for the New York Giants on Sunday. More throughout the week.