There is one question that is central to today's New York Giants-Atlanta Falcons NFC Wild-Card game. Which Giants team will take the MetLife Stadium field at 1 p.m. ET?

"There is a very real sense about where we are and the consequences if you don't do well, play well and win," Giants coach Tom Coughlin said this week. "they're very, very happy to be in the playoffs and they're anxious to play and perform and they understand what the single elimination tournament is all about."

Twenty-six Giants have playoff experience, and 16 were members of the team that defeated the New England Patriots in Super Bowl 42. This, however, is the first time in three seasons that the Giants have been to the playoffs. This will be the third trip in four seasons for the Falcons, who have gone winless in their first two playoff appearances with Matt Ryan as quarterback.

The Giants are a three-point favorite.

These are two teams that appear pretty evenly-matched in many areas, making this an intriguing game that could go either way.

Other Stuff Worth Reading 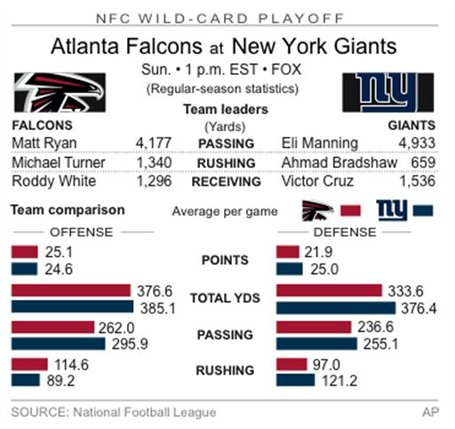