Lots and lots of goodies for you to read this morning, New York Giants fans. It's a veritable link fesitval, so I will just quit blabbing and start linking.

The Wild Card schedule is set and four games are on tap for the weekend. SB Nation bloggers from all eight teams on deck this weekend have made their predictions for the game.

The difference defensively is that the Giants do have a potentially game-changing pass rush. Ryan and his plethora of offensive weapons will put up some points, just as Manning's loaded attack will. But the New York D-line and a charged-up Meadowlands crowd will be enough to move the G-men on to round two.

Three to Focus on: Falcons @ Giants, Wild Card Round | ProFootballFocus.com

Ben Stockwell of Pro Football Focus offers a look ahead to key matchups in the Wild Card Weekend game between the Atlanta Falcons and the New York Giants.

Khaled Elsayed gives and explains the Pro Football Focus All Pro Team for the 2011 NFL season.

Andrew Brandt, an NFL analyst for ESPN who was a vice president with the Green Bay Packers from 1999 to 2008, said in a telephone interview that he expected the Giants to approach Cruz about a contract extension by midseason of 2012, if the receiver continues to perform well.

How are we die-hard Giants fans supposed to remain tethered to reality -- that our team is just a touch over mediocre -- when we know at any moment the Giants could decide to become outstanding, sack the quarterback a dozen times in two games, and then go on to win the Super Bowl? Yes, they lost five of six contests after a 6-2 start before posting back-to-back wins against the rival Jets and Cowboys to earn a playoff berth.

But just ask yourself one question: A week from Sunday, whose team bus do you think the Green Bay Packers hope to see rolling up to Lambeau Field, the Falcons or the Giants? Easy answer. (The Falcons are a bat-on-ball kind of team -- smacking it the other way, drilling it through the hole. The Giants are the scary cleanup hitters -- a swing and a miss three times, a blast over the wall the next.)

Both you and I know you're going to be on the couch for 12 hours over the weekend watching NFL playoff games. If, sadly, you aren't able to devote yourself fully to the cause, use Shutdown Corner's wild-card rankings to figure out which games are worth your time.

Many might favor the Packers and Patriots heading into the playoffs, but Brian Billick writes that a closer look at the numbers reveals those teams' flaws and points to two other potential favorites.

This graphic from predictionmachine.com showing the chances of each team to win the Super Bowl, based on 50,000 simulations of each game. 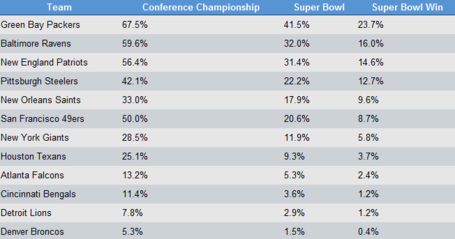 Finally, this Fanpost from a member of The Falcoholic made me feel good. This is the way I want Big Blue View to be seen by fans of other teams. Good job, gang!