Share All sharing options for: Giants Vs. Falcons: 'Five Things To Watch' 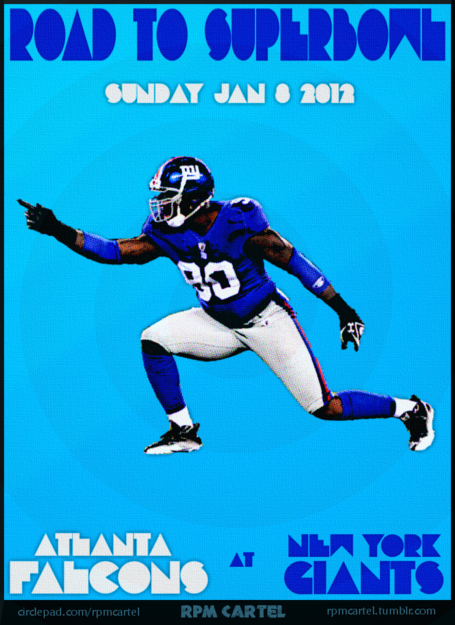 Less than two days until the kickoff of New York Giants vs. Atlanta Falcons in the wild-card round of the NFC playoffs. While you wait anxiously for Sunday, here are my 'Five Things To Watch' during the game.

1. Victor Cruz vs. Brent Grimes: I keep hearing from the Atlanta faithful about how the diminutive Grimes is the perfect guy to shut down Cruz. Well, we will see on Sunday. PFF gives Grimes the second-highest +/- grade in the league this season behind Darrelle Revis of the New York Jets. We know the Giants need plays from Cruz and Hakeem Nicks to win the game, so this match-up is critical.

2. Can The Giants Control The Atlanta Running Game? Michael Turner is the best running back the Giants have faced in quite a while -- and he might be the best back they have faced all season. Run defense has not been an issue lately, though it was earlier in the season. The Giants must control the running game on Sunday. If they can't, Atlanta's offense will march up and down the field all day.

3. The Giants Pass Rush: The Giants have to release the Kracken, as they have the past couple of weeks. Of course, to be able to do that, they must first accomplish No. 2. It is that pass rush that keys the defense, and it has to do to Matt Ryan of Atlanta what it did to Tony Romo of Dallas a week ago.

4. Special Teams Play: These two special teams units appear to be pretty much dead even. Can one of them make a game-changing play?

5. The MetLife Stadium Crowd: In this week's 'Friday Five' Pat Traina of Inside Football said the crowd Sunday against the Dallas Cowboys was "simply amazing." Without the long-running rivalry with the Cowboys to stoke the fire, can Giants' fans bring that kind of passion again? We'll see, because we know Giants' fans do have a reputation -- deserved or not -- for sometimes sitting on their hands, or turning on their team.