Share All sharing options for: Thank You, New York Jets

While the New York Giants prepare to face the New England Patriots in the 2012 Super Bowl, Giants fans should take a little time to reflect -- and to thank Rex Ryan and the New York Jets for helping them get to Indianapolis.

The Giants walked into MetLife Stadium to face the brash, bragging Jets on Christmas Eve as the visiting team. They walked into a stadium decked out in green, and found that their hosts had made the classless decision to cover up the murals showcasing the four Super Bowls the Giants had reached. They walked in with a 7-7 record and with their season on life support.

They walked out of MetLife Stadium that day with a convincing 29-14 victory, having torn down the sheets covering the Super Bowl murals and having shredded the doubts that they were a good football team. They have not been stopped since, winning five consecutive games.

Giants players have often pointed to that game as the turning point. Co-owner John Mara also did so during a radio appearance this week, saying "we win that Jets game and we just seem to get on a roll at that point." 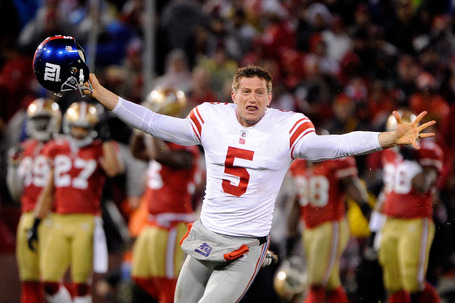 Steve Weatherford (5) of the New York Giants celebrates after the Giants won 20-17
in overtime against the San Francisco 49ers during the NFC Championship Game
at Candlestick Park on January 22, 2012 in San Francisco, California.
(Photo by Thearon W. Henderson/Getty Images)

Giants fans should also thank the Jets for one other thing -- the presence of punter Steve Weatherford on the Giants roster. Weatherford just had the best season of his NFL career, and he turned an obvious Giants weakness from a season ago into a strength this season.

Jets special teams coach Mike Westhoff took some shots at Weatherford when the Jets made the decision to let him walk, and both Weatherford and placekicker Lawrence Tynes weren't shy this week about ripping into Westhoff.

Tynes called Westhoff's criticisms of Weatherford "the worst statement of the year by any coach in this game."

For his part, Weatherford told the New York Post he hasn't spoken to Westhoff in a year and gave Giants special teams coach Tom Quinn credit for his success this season [gasp!] while taking a poke at Westhoff.

"I think a lot of it has to do with playing for Tom Quinn and being comfortable and being confident and being strong," Weatherford said. "I think playing for the Jets and playing for that positional coach was draining. I thought it was difficult. It was physically taxing.

Come to think of it, Giants fans should probably thank the Jets for taking Plaxico Burress, too.

One again, thank you New York Jets. You have been a very helpful little brother this season.