Da'Rel Scott: Ex-Eagles Fan Aims To Be A Giant

Share All sharing options for: Da'Rel Scott: Ex-Eagles Fan Aims To Be A Giant

Let's get the bad news with Da'Rel Scott out of the way right now. Scott grew up in Conshohocken, Pa., just outside of Philadelphia. That means he grew up surrounded by, and in a family of, Philadelphia Eagles fans. And he admits he was one. Until the Giants selected him in the seventh round of the 2011 NFL Draft, that is.

"My family is with me 100 percent," Scott said via phone Sunday evening. "We all grew up Eagles fans, but they changed to Giants fans automatically when I got the call."

Now that we have that out of the way let's talk about what Scott brings to the Giants, and his potential impact. What he brings is speed, and lots of it. To be exact, 4.34 40-yard dash speed. He brings big-play ability, having averaged 5.6 yards per carry at the University of Maryland. He brings the ability to catch the ball out of the backfield, having caught 48 passes during his time with the Terrapins.

Scott knows that the Giants, on paper, already have a crowded backfield with Brandon Jacobs, Ahmad Bradshaw and D.J. Ware. He also believes there is a place for him.

"They're a great core of guys. I think I can help the offense out with my speed, being able to catch out of the backfield," Scott said. "Starting off my rookie season I can pretty much get in there and be a third-down back, catching out of the backfield and making plays.

"Every team needs a back like that. Getting me in open space with my speed is a plus that you're getting with me. I feel as though that is something I can definitely contribute to the offense."

With the NFL Lockout dragging on, of course, Scott and other rookies across the NFL are unable to go through rookie mini-camps or get to know their coaches. Scott will, however, get to know quarterback Eli Manning and some of his Giants' teammates this week. 'Camp Eli' may have officially ended last week, but Scott will be at Hoboken High School today working out with Manning and probably some other players.

"I've been reaching out to Eli and he's been getting back to me. He's been setting some stuff up. We're going to be there for a couple days," Scott said. "I've been looking forward to it. With the whole lockout situation I wasn't able to work out with any of the so I just feel blessed to have an opportunity to still be able to work out with them."

Being a seventh-round pick Scott needs all the opportunities he can get. The lockout, of course, could limit the ability of later-round picks to get snaps and impress coaching staffs. Scott knows that.

"I can't control it. It happened the way it happened, I did get picked later in the seventh round. It's just something I'm going to have to deal with," Scott said. "I just feel confident that when I do get the opportunity to be able to learn the playbook and stuff I'll be fine with it. I'm a quick learner and I can definitely help the Giants out with my big-play ability."

Scott jumped to the attention of NFL scouts in 2008 with a tremendous sophomore season, gaining 1178 yards. In his junior and senior seasons combined, he gained 1,135 yards. The Giants were not scared away by the dropoff the past two seasons.

"This guy is 5-foot-11, he is 211 pounds. He has been clocked under 4.4. He had an extremely productive sophomore year at Maryland - not as much production in the final two years. There are a couple of reasons for that we believe," said Giants coach Tom Coughlin. "But at that point in the draft this was a outstanding pick in terms of the contribution of a running back and a very fast running back at that."

"We took a flier on the guy because he is big and fast. He is fast, he had a terrific sophomore season. His production fell off, but late in the draft this is what you look for. You look for guys with some redeeming qualities. This guy is big and fast. We hope this guy will come over here and do a Willie Parker, one of those kinds of things."

Scott was limited to just seven games in 2009 by a broken arm. In 2010 he expected to be the Terrapins' No. 1 back, but found himself sharing time with Davin Meggett and D.J. Adams.

"They're two great other backs that were backing me up. I had to trust the coaches and handle the way they wanted to share the ball," Scott said. "It's not that my play decreased. It was just the lack of opportunity getting the ball."

Maybe, just maybe, the Giants will give Scott the chance to get the ball and use that speed to run past opposing defenders in 2011. Maybe even defenders wearing green and white Philadelphia Eagles uniforms. 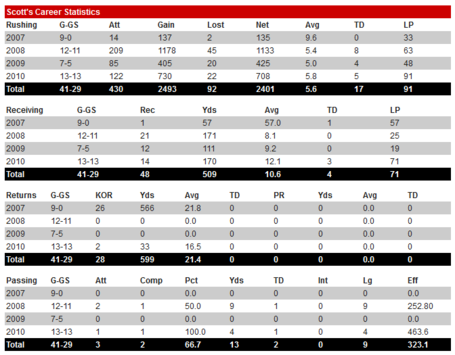