Greg Jones: 'I Do The Very Best Job I Can Do'

Share All sharing options for: Greg Jones: 'I Do The Very Best Job I Can Do'

When the New York Giants drafted Michigan State linebacker Greg Jones in the sixth round of the 2011 NFL Draft the reaction around here was almost universally positive. I had an opportunity to speak with Jones Tuesday afternoon, and subsequently learn much more about him.

Read through this, and the links at the end of the post, and my guess is you will like the young man even more.

Want an example? Try this quote:

"I know that the Giants fans will see a player who [is] hard-working, who will step up when the time is called upon, who will be a leader," Jones said. "I'm always the type of guy that just leads. I don't mean to do it on purpose, I don't mean to step on people's toes or anything like that. I feel the need to step up and then I do it. I do the very best job I can do."

Jones was selected in the sixth round by the Giants, 185th overall. He said the selection surprised him.

"I had no clue that they were even interested in me," Jones said. "We talked at the NFL Combine in Indianapolis, but other than that we didn't really talk much at all.

"I didn't know what their linebacker situation was. Looking at the type of guys they have already and the type of defense that's already there ... I really think it's going to be a good fit."

The Giants obviously hope so.

Jones said the Giants told him he will be used as a middle linebacker in their 4-3 defensive scheme. That, of course, puts Jones in competition with incumbent middle linebacker Jonathan Goff and last year's fourth-round pick, Phillip Dillard.

Jones said he is not worried about the NFL Lockout making it more difficult to learn the playbook. He is, however, concerned about losing time learning his teammates and coaches.

"It's not a huge problem. I don't feel like I'm a guy that has a slow learning curve. For me, I like to get to know the coaches, I like to get to know what they want out of me exactly, what my role is. That's what I think is difficult for me. Learning the plays is really just a catch-up to be in the same mind-set of my other teammates," Jones said. "It's hard to do already when you're a rookie.

"Once I do get a playbook and I have that short amount of time to learn I feel like I can get a good amount of it down."

"That's not going to happen in a week. That's going to take some time," Jones said. "I've always been a big believer in playing together as a team. If you're not building that chemistry with your teammates then it's going to be really hard to win, especially when you're traveling on the road week-in and week-out. I think that's the hard part about not being there because of the lockout."

After the Giants drafted Jones, General Manager Jerry Reese said he thought Jones would come to the Giants "with a chip on his shoulder."

"I'm pretty sure he feels like he should've been picked a lot higher than where he got picked," Reese said. "He'll come in here with something to prove."

"I really don't think so. I don't think that when you have over 100 tackles three years in a row that I dropped at all. I felt like my teammates got better around me," Jones said.

"I've done everything to prove myself. Being an all-around player, being a leader, bringing my team to a championship. When I did have a hundred and thirty some tackles or whatever I had last year we went 6-7. That doesn't add up right to me.

"I don't know what type of senior year they wanted me to have or anything like that. I wish somebody would have given me a heads-up, but I felt like I put my heart and soul into every single game, I didn't take any plays off, I did all I could do."

Jones admitted he had expected to be drafted earlier than the sixth round.

"I was surprised. Yes, I did expect to go earlier, but I felt like every guy in the draft always expects to go a little bit earlier than when they're picked, unless you go No. 1," Jones said.

"I'm very grateful and I'm happy and excited to be a Giant."

Off the field Jones said he loves movies -- so much so in fact that he majored in Media Arts and Technology at Michigan State. He said he also loves to sight-see -- and with that in mind amazingly said he has never been to New York City. The closest he got was a visit to Niagara Falls.

"I've always, always wanted to go to New York City. I always wanted to see Rucker Park," Jones said. "At the time when I was playing basketball I was a huge fan of that history. There's a lot of stuff I want to see, so I'm really excited about it."

If Jones is as productive with the Giants as he was with Michigan State he will have plenty of time to get to know the city very, very well. 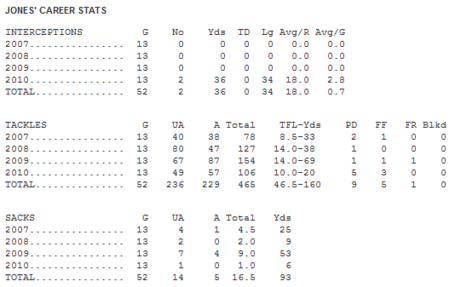