Share All sharing options for: Giants Vs. Cowboys: Five Things To Watch 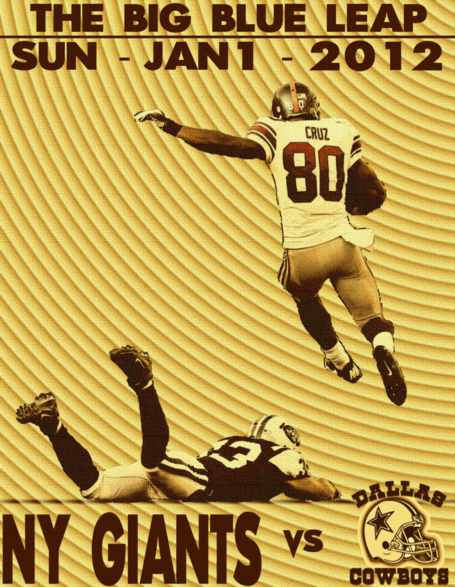 New York Giants vs. Dallas Cowboys for the NFC East title. For all intents and purposes, the first playoff game of 2012. Here are my 'Five Things to Watch' Sunday.

1. What Will Perry Fewell Do? The Giants' defensive coordinator is one of the central figures in this game, at least the way I see it. If Osi Umenyiora plays, how will Fewell use him? And how much will he play? I would hope it is limited snaps in pass-rush situations, and that we aren't watching a whole lot of a limited Umenyiora play while the team's best defensive player, Jason Pierre-Paul, stands on the sideline.

The other thing to watch is what Fewell does with the secondary. Last week against the Jets Fewell -- finally -- simplified the coverage schemes to something his players could actually understand and execute. Will he stick with that, with playing to the strengths of his players, or will he revert to his tendency to play a system and try to out-think everybody? If he does the latter, the Giants are in a lot of trouble.

2. Can Anybody Catch What Eli Manning Throws? Beyond Victor Cruz the Giants' receiving corps is a big mess at the moment. Hakeem Nicks (hamstring) and Mario Manningham (knee) will play, but how limited and how effective will they be? Can Manningham, Ramses Barden or Travis Beckum manage to run a couple of routes correctly and make a play? Can Bear Pascoe, for at least one game, do a decent Jake Ballard impersonation? Or, will the Giants be stuck throwing the ball to Cruz and throwing bubble screens to D.J. Ware as the extent of their passing attack?

3. Which Giants' Running Game Will Show Up? Will we see the rushing attack we saw in the first half last week against the New York Jets (six yards on seven carries) or the one we saw in the second half, when the Giants ran for 109 yards? The Giants must get production from the ground game.

4. Special Teams Play: I am still waiting for the Giants to deliver a game-changing punt or kickoff return. As much as I criticize special teams coordinator Tom Quinn the Giants have done a lot of things well on special teams this season. The one thing they have not done is break off any difference-making returns. Sunday night would be a good time to change that.

5. The MetLife Stadium Crowd: The Giants are breaking out the "All-In" rally towels. You can expect MetLife to be rocking when the game starts. My question is, will it stay that way if things don't go well for the Giants early in the game? Or, like it so often does when the Giants are at home, will it get uncomfortable?