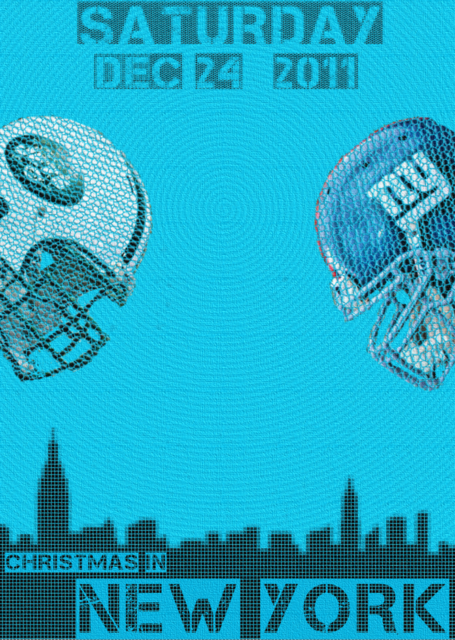 Saturday marks the second time that the New York Giants face Rex Ryan and his New York Jets this season. The two squared off in the third week of preseason. Despite having the leading passer, rusher and receiver, the Giants were unable to come out on top of the "Snoopy Bowl" with that shiny, new trophy.

Both franchises will meet this Christmas Eve, in what could be entitled, the "Dear Santa, Please Save My Season Bowl." Each team comes in with their tails between their legs after suffering two very different and equally embarrassing losses, against two teams with records below .500. Saturday's game is not a "must win" scenario for either club. However, it is in the best interest of Tom Coughlin's crew to come away with the win. The Jets need to put another win under their belt also, to stay ahead of the pack. Otherwise, they'll both be relying on prayer. As far as I can see, Tim Tebow has that NFL market cornered.

Who are the New York Jets?

If you ask Rex Ryan, he'll tell you that they are the next Super Bowl champions. Their overall performance this season tells a different tale. Although Gang Green are currently slotted as the sixth seed in the AFC playoff race, they have by no means secured that spot. There are four other teams vying for that seed and these next two weeks will be the tell all.

Who are the New York Giants?

That seems to be the million dollar question. Each week it seems that a different team is showing up to play. That is not entry true. We witnessed a four game losing streak only one week prior to their win against the Dallas Cowboys, a win that is proving to be the most pivotal of the season. Granted, the Giants lost to three of the best teams in the NFL, during that four game stretch. It was no mystery that this part of the season would make or break them. The more relevant question now seems to be, is the Big Blue bow about ready to break?

Mark Sanchez: This young quarterback is still developing. He shows signs of veteran play from time to time. He also displays the typical rookie play that you would expect from a third year quarterback. Sanchez doesn't seem to be able to work well under pressure, something that has hindered the Jets this season. He is not the first quarterback to take some time to blossom and he won't be the last. That said, he is on track to having his best year to date.

Sanchez is ranked 15th in the league.

Eli Manning: Eli is coming off of his worst performance, statistically speaking, in three years. Manning's QB Rating of 45.5, last week, was unseemly given the fact that he is having the best statistic season of his career. Eli leads the league with most 40+ yard plays. Yet, he has been slowly climbing up the ladder in an area that Giants fans had hoped was a distant memory, interceptions. Nevertheless, Eli Manning has been the sole reason that the Giants are where they are this year and that's not very far at all. The G-Men will need Manning to keep up his play if they're going to grab that fourth seed back from the Cowboys.

Manning is ranked 3rd in the league.

Shonn Greene carries the bulk of the load for Gang Green and he does a fine job of it. He is 59 yards away from hitting the 1,000 yard mark, a career best. Even though the Jets have one of the best running backs to have played the game over the last decade, LaDanian Tomlinson, he has not been much of a factor. Tomlinson suffered a knee injury earlier in the year. But all signs point to his best days being behind him.

The Jets are ranked 21st in rushing.

Brandon Jacobs and Ahmad Bradshaw share the load, mainly do to Bradhsaw's broken foot. Giants fans can breathe a sigh of relief this year. BJ and Bradshaw have collectively run for 1,061 yards thus far. That is almost 1,000 yards less than what they both chalked up in 2010. Aside from this year's poor numbers, Jacobs entered himself into the Giants record books with the most career rushing touchdown, two weeks ago. He has certainly left his mark on this team. But it doesn't look good for his return next year. Bradshaw might find himself elsewhere too.

The Giants are STILL ranked 32nd, dead last, in rushing.

This has been an area of concern for the Jets. Mark Sanchez is the fifth most sacked quarterback in the league. Their O-Line would be in much better shape with a healthy Nick Mangold at Center. He has missed some time this season and has not been playing at his full potential since. There is a good mix of veteran and up-and-coming player on this line. But they could use a little work.

Even though this is an area of strength for the G-Men, they slipped down two notches last week. The story here has been injuries and replacements. It seemed as if the winning combination was found with Kevin Boothe and Mitch Petrus. But after last week's performance, who can really say? One thing is for sure, the O-Line for this Giants team will need to bring their "A" game for the remainder of the season, if they expect to get to the postseason.

The dominant days of Mark Gastineau are long gone. Today, there is a group of linebackers that get mild pressure on the quarterback and are adequate at stopping the run. One thing they do well is get their hands on the ball. David Harris has the second most interceptions of all linebackers in the NFL. He also has a touchdown under his belt. The Jets linebacking crew are not the most feared in the league but they are definitely worthy of respect.

To be fair, Lawrence Taylors these guys are not. Injuries have played a part in the linebacker department for the Giants. For a team that lacks at the position, there has been some good play from Michael Boley and Mathias Kiwanuka, when he has been active. This is definitely an area that the front office needs to focus on in the off-season.

This front three are a solid group of athletes. Sione Pouha, a seven-year veteran, leads this line with fifty-one tackles. Mike DeVito holds the fort on the left side. But the real story here is the solid play of the rookie, Muhammad Wilkerson. This first round draft pick has earned the starting job and rightfully. so. He has forty-one tackles, two sacks and one forced fumble. The best news of all is that he is still developing. Expect good things from this kid.

The Jets have the 16th-ranked rush defense.

This is the powerhouse of the Big Blue Wrecking Crew, mainly because of Jason Pierre-Paul. JPP has been such a force on the field this year that 90's rappers, Naughty By Nature, revamped their smash hit, "You Down With OPP" to follow Pierre-Paul's fierce play on the JumboTron. Linval Joseph and Chris Canty have been pretty solid as well. Justin Tuck has been in and out this season with injury, with Dave Tollefson filling in. For all of their strengths, they still can not manage to stop the run on a consistent basis. But at least we have a catchy new stadium theme, "You Down Wit' JPP?" Yeah you know me.

The Giants have the 22nd-rankedrush defense.

This is arguably the strongest link in the Gang Green chain. Darelle Revis and Antonio Cromartie are two of the finest defensive backs in the league. Also doing this secondary justice is the six-year man out of Michigan State, Eric Smith. Smith is the leading tackler for the Jets this season. These guys will not be easy to shake for the Giants receivers.

Here, we have the flip side of our stadium mate's coin. The G-Men's secondary is probably the single, biggest problematic area this year. We have seen way too many big plays get down the field in recent weeks. There has been no cohesion in this unit. In most cases, it has simply been paper thin. Expectations were high for first-round draft pick, Prince Amukamamara. Whether or not his lacking performance is due to the injury he suffered earlier in the year, that he is a rookie unsure of the scheme he is playing in or that he wasn't drafted higher for a reason remains to be seen. What is known is if you want to put up big, quick numbers against the Giants, just throw the ball down the field.

The field goal unit for the Jets do not have big numbers, largely due to the fact that they have been fairly successful getting into the end zone for seven. Rex and co. are ranked fifth in touchdowns. Of their 23 field goals, the Jets have only made 18. That equates to a mere 78%, fifth lowest in the league. TJ Conley has been doing a bang-up job as a punter. He is fourth in getting the ball inside the twenty yard line with a long of 63 yards. Their return game has been superb this year. They are currently ranked third, which includes a 107 yard touchdown return.

The Giants have attempted the second least amount of field goals in the league. They too, have been successful getting into the end zone and are ranked sixth in touchdowns, just underneath the Jets. Lawrence Tynes is 80% this season. Steve Weatherford continues to make last year's punting issues a bad memory. He is ranked seventh in getting the ball inside the twenty-yard line. The return game has not been spectacular. Big Blue is ranked 19th in returns. Special teams tackles and blocked punts have been an area of stand-up performances by JPP and Chase Blackburn, who was re-signed late in the year. He just might find a spot on the roster next year if he continues to bring it.

The New York Giants defense is ranked 28th. (Yes, believe it or not, they climbed up two spots from last week)

As mentioned, this games is not a "must win." It is more of a "you had better win, or face the consequences later" type of game. Both teams have conference and divisional rivals breathing down their necks. The Giants are behind the Cowboys and are playing catch-up. This won't be a cutesy, preseason matchup with bragging rights at stake and an adorable little toy. This will be a hard fought, claw and scratch for every yard game with heavy playoff indications. Will Rex Ryan call the game of his career? Or will Eli Manning surgically remove the Gang Green from MetLife Stadium?