Share All sharing options for: Giants By The Numbers: 43 Is For ... 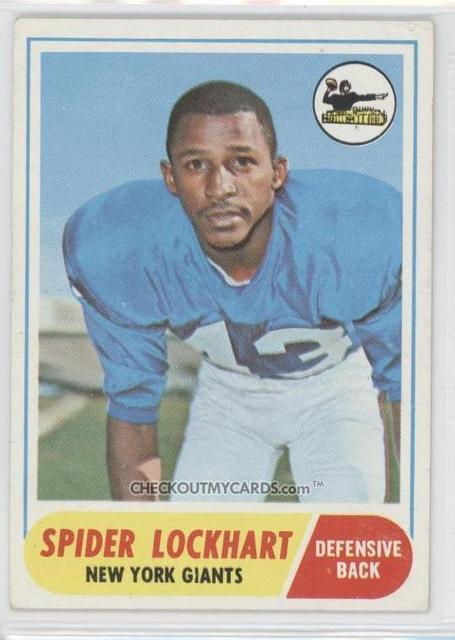 Lockhart was one of those top-notch players who had the misfortune of spending his excellent NFL career playing for a string of awful New York Giants' teams.

A 13th-round draft choice in 1965, Lockhart spent his entire 11-year career with the Giants. He represented the Giants in the Pro Bowl twice, and finished his career -- spent entirely in New York -- with 41 interceptions.

From Lew Freedman's 'New York Giants: The Complete Illustrated History,' here is a section on Lockhart.

When things were falling apart around him, Lockhart was a defensive leader in the 1960s. Emeln Tunnell was coaching the secondary players and he loved Lockhart's style of playing receivers tight. "Skinny, that's the way to play it, just like a spider," Tunnell said. And that's how Lockhart came to be nicknamed Spider.

Lockhart, who played at only 175 pounds, intercepted 41 passes in his career and was an accomplished punt returner. He gained a reputation as a hard-hitter, and as a guy who would play with minor injuries. Lockhart was close personal friends with adhesive tape and other wraps, but he played hurt. "It's my job," he said. "Mr. Mara pays me to play football and I know of no other way to earn my salary than to give 100 percent."

With an attitude like that, I'm not sure Spider would appreciate some of today's high-priced prima donna-type stars.