Share All sharing options for: Giants By The Numbers: 40 Is For ... 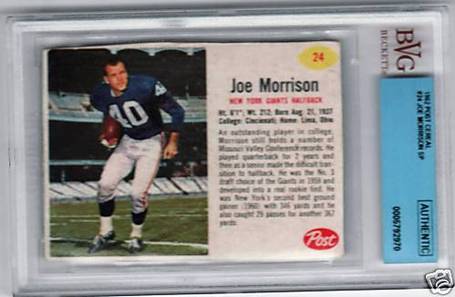 If you are not familiar with Morrison's stellar career as a New York Giant, you have some reading to do. Morrison was one of the best and most versatile offensive players in team history.

Here is a segment on Morrison from Lew Freedman's 'New York Giants: The Complete Illustrated History.'

One of the most overlooked players, who matured and endured in unexpected ways during his long stay with the Giants, was Joe Morrison. Morrison stood 6-feet-1 inch and weighed 210 pounds. He was a third-round pick out of Cincinnati in 1959, but if someone perused Morrison's position line in the Football Encyclopedia it would imply that the Giants didn't know what to do with him. Morrison is described as a halfback, flanker, wide receiver and fullback (special teams' play was forgotten). He was, in fact, all of those. In a career that ended in 1972, Morrison became one of the most valuable Giants. As time passed, Allie Sherman relied more and more on Morrison to perform a variety of tasks. One minute he was rushing the ball, the next minute he was catching it. The phrase "all-purpose player" was pretty much invented with Morrison in mind. At one point, Sherman said he would use Morrison at quarterback if injury called for it. "Joe's value to this team is his ability to come off the bench and give us a winning performance at almost any position," Sherman said. "Very few fellows can do this."

Morrison gained 8,107 all-purpose yards during his Giants' career. He had five seasons of 40 or more catches, and three seasons in which he ran the ball more than 100 times.

The number 40 has been retired in his honor.