Share All sharing options for: Giants By The Numbers: 38 Is For ... 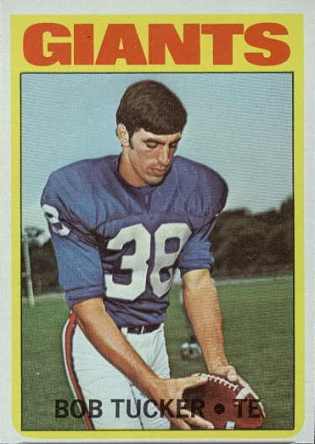 Before Mark Bavaro came along, Tucker was most likely the best tight end in Giants' franchise history.

Tucker played for the Giants during the dark years of 1970-77. He was not a Hall of Fame talent, but in many ways he was to the offense what Brad Van Pelt was to the defense.

A bright spot, a true weapon the opposing team actually had to account for. I remember enough of those days to know that the Giants did not have many of those guys. Tucker was also my favorite Giant for much of his career with the team. I was broken-hearted when he got traded to Minnesota part-way through the 1977 season.

Tucker caught more than 50 passes three times as a Giant, and finished his Giants' tenure with 327 catches, 4,376 yards and 22 touchdowns. He is still eighth on the team's all-time receptions list.

Tucker was not a big guy, but I remember him having huge hands and being able to run away from linebackers trying to cover him. In some ways, he might have been a tight end before his time. In some ways, I honestly think Tucker was a player comparable to a modern-day Dallas Clark. Only, the Giants stunk. And teams did not use the tight end the way they do now.