Share All sharing options for: Giants By The Numbers: 55 Is For ... 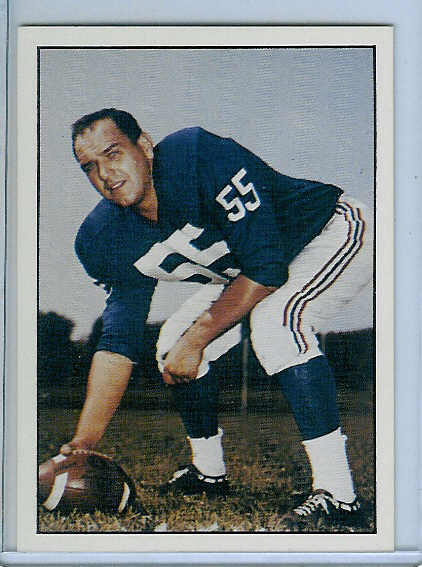 Wietecha was a four-time Pro Bowler and one-time All-Pro at center during a New York Giants' career that spanned from 1953-1962, roughly coinciding with the team's glory years.

From Lew Freedman's 'New York Giants: The Complete Illustrated History,' which has often been referenced during this series, a bit on Wietecha.

After hiking the ball to the quarterback, most of the time the center disappears into a pile of big bodies at the line of scrimmage, throwing a semi-anonymous block and hoping no middle linebacker leaps over his head. The role of center is about as invisible as it gets, but Ray Wietecha was one regular who became an immovable rock in the middle of the Giants' offense, even though at 6-feet-1 inch and 225 pounds, he was small for the position.

Wietecha was first noticed as a lineman at Michigan State, then Northwestern, both of the Big Ten, after he transferred, and he was one of the old reliables who fought their way into the Giants' lineup under Steve Owen and remained under the Allie Sherman regime, not retiring his cleats until 1962. By then he had been voted an all-star four times and served as the anchor for a powerful and cohesive front line.

Sherman loved Wietecha's knowledge and strength. "Wietecha is the best in the league," Sherman said. "Ray Wietechas is my quarterback up front. Ray calls out all the 'bastard' defenses. We face anything other than the standard 4-3, Ray spots it, calls it out, switches our blocking assignments on the line. And block? That man's a bear."

When Wietecha died from an aneurysm in 2002 at the age of 74, the New York Times ran a tribute. Here are some snippets from that tribute.

Playing for the Giants from 1953 to 1962, Wietecha gained a formidable reputation not only for his blocking but also for the accuracy of his snaps on field-goal attempts and punts. He played on teams that won five Eastern Conference titles and one league championship, a rout of the Chicago Bears in 1956. ...

Wietecha took special pride in his long snaps and performed that task without peering back at the kicker in order to prepare himself more quickly for onrushing defensive linemen.

Pat Summerall once recalled: ''In four years of place-kicking with the Giants I never saw the laces of the football. Wietecha always snapped the ball with the strings facing front.''

Wietecha also took pride in his blocking and his leadership. ''I could remember assignments,'' he said. ''I told players what to do. I was in charge of that little group up front.'' ...

When the Giants were rolling to conference titles, Wietecha and his line protected quarterbacks Charlie Conerly and Y. A. Tittle and blocked for running backs Frank Gifford and Alex Webster. Offensive linemen seldom garner headlines, but as Wietecha once noted: ''When we won, the Giants' offensive line became famous. I became well known.''

Other Notables Who Wore 55