Share All sharing options for: Giants By The Numbers: 53 Is For ... 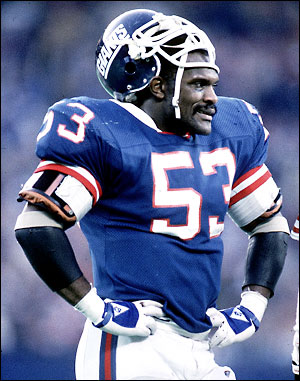 No, this one is not difficult to get right. In the eyes of New York Giants' fans old enough to have seen him play, 53 will always be Carson's number. No matter who wears it -- and that is not meant to offend Bryan Kehl, current occupant of the jersey.

Harry Carson played his entire 13-year NFL career with the New York Giants. An inside linebacker, he was selected to play in nine Pro Bowls, including seven in a row from 1982-88. Carson led the Giants in tackles six times, was a two-time All-NFL selection and was a leader throughout his career and the captain of the 1986 Super Bowl champions.

Carson joined the Giants as a fourth-round draft choice in 1976 from South Carolina State, where he never missed a game in four seasons, was a two-year captain and a Little All-America selection by the Associated Press. A defensive end in college, Carson successfully made the transition to linebacker with the Giants so quickly and so successfully that he was voted to NFL All-Rookie team.

Carson was a two-time first-team all-pro and a five-time second-team selection. He played 173 games in a Giants uniform – tying him with Keith Hamilton for seventh all-time – and he was a punishing run defender who also intercepted 11 passes. Carson had 17 sacks, 14 fumble recoveries and seven forced fumbles. He had 25 tackles (20 solo) in a Monday night game against Green Bay in 1982 and seven tackles in the Giants’ 39-20 victory over Denver in Super Bowl XXI.

During his prime, Carson was the best run-stopping linebacker in the NFL. In the seven seasons from 1981 to 1987, Giants’ opponents averaged only 3.59 yards per rushing attempt, a remarkable achievement for so long a period. During that period, Carson was credited with 856 tackles, including 627 unassisted tackles.

Carson was a quiet, dignified, dependable presence on some of the best defensive teams the franchise has ever had. He is also the inventor of the Gatorade shower.

Here is more on Carson from his Hall of Fame page.

Carson led by example both on and off the field. Carson, as an inside linebacker, was a ferocious run stopper. Known for his "all-out" style of play, he attacked onrushing blockers head on in his pursuit of the ball carrier. Later in his career when he was joined by outside linebackers Lawrence Taylor and Carl Banks, there was no better linebacker trio in the NFL. Like Taylor, he was extremely difficult to defense in blitzing situations and he had the speed and agility to be an effective pursuit player, even when the play was directed away from his area of responsibility.

Although he was a very consistent player, Carson seemed to produce top performances in key games. That was the case in New York's Super Bowl season. His interception and 12 solo tackles against the Washington Redskins on December 7 virtually assured the Giants of the NFC East title. It was also Carson who made the "big play" on the Giants' first-half goal line stand against the Broncos in the Super Bowl, when he stuffed Gerald Willhite for no gain.

Without doubt, one of my favorite Giants ever, and an all-time great. I would love to hear some of the old-timers weigh in with thoughts on this question. Who was a more dominant middle linebacker, Carson or Sam Huff?

Other Notables Who Have Worn 53