Share All sharing options for: Giants By The Numbers: 52 Is For ... 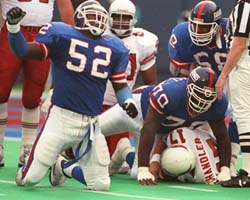 A formidable inside linebacker and a member of the Giants' Super Bowl-winning teams in 1986 and 1990. Johnson was just a rookie in 1986. In 1990, though, he had his best professional season with 115 tackles, 3.5 sacks, three forces fumbles and an interception. He was named All-Pro.

After leaving New York, Johnson played for the Browns, Lions and Jets in a distinguished 13-year career. He is now defensive line coach in New England, and some thought he would be considered for the Giants' defensive coordinator job prior to the hiring of Perry Fewell.

Johnson made nearly 1,200 tackles in his NFL career. Of those 579 were unassisted tackles made during his seven seasons with the Giants.

Other Notables Who Wore 52