Share All sharing options for: Giants By The Numbers: 51 Is For ... 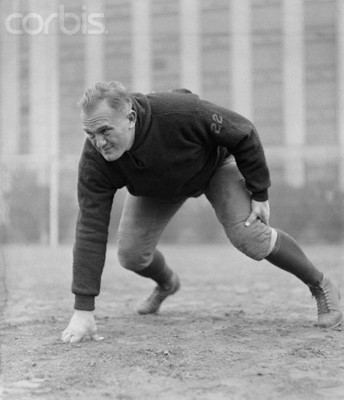 What I do know is that Hubbard is a Hall of Fame lineman, enshrined as a charter member when the Hall opened in 1963.

Here is a little about Hubbard from his Hall of Fame page.

From Lew Freedman's 'New York Giants: The Complete Illustrated History,' here is a section about Hubbard.

Cal Hubbard was the first king-sized Giant. When men who weighed less than 200 pounds still played on the offensive and defensive lines, the 6-feet-5 inches Hubbard, whose weight was variously listed at between 250- and 280 pounds during his career, could scare opponents half to death just by shouting "Boo!"

Hubbard was a tackle and an end; he was one of the most important reasons why the intimidating defense of the Giants in 1927 surrendered an absurdly low 20 point in 13 games. Hubbard, who was inducted into the Pro Football Hall of Fame when it opened in 1963, was also a major league baseball umpire and is in the Baseball Hall of Fame, as well. "The best I ever saw was Cal Hubbard," said Jimmy Conzelman, a fellow football Hall of Famer for the then-Chicago Cardinals.

Hubbard was remarkably fast for his size, something else that bothered running backs trying to zip past him, and he hit very hard. Hubbard was called a human bowling ball for the wreckage he wreaked, and he didn't leave many spares when he rolled along. Old football comrades must have gotten a chuckle out of the description "The Enforcer," which was applied to Hubbard when he laid down the law in baseball.

Hubbard was voted the best tackle in the NFL's first 50 years of play.

Zak DeOssie, who seemingly will be no more than a long-snapper for his career, currently wears 51.