Share All sharing options for: Giants By The Numbers: 50 Is For ... 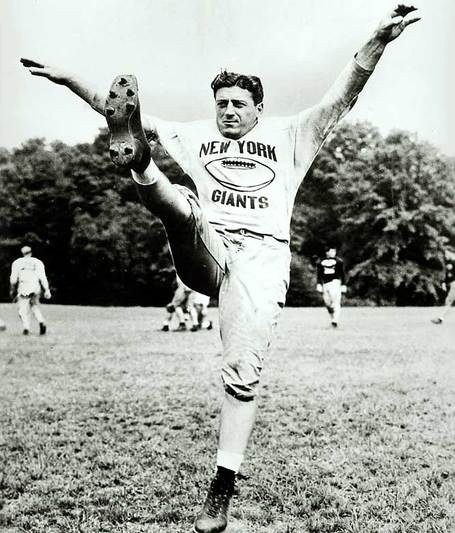 This three-time All-Pro was elected to the Pro Football Hall of Fame in 1967.

Here is part of the info on Strong from his Hall of Fame page.

And here is more detail from the same bio.

Halfback Ken Strong's most publicized performance in 14 years of pro football came in the 1934 National Football League Championship Game. In that now historic game, Strong contributed 17 points on two touchdowns, two extra points and a field goal to lead his New York Giants to a 30-13 victory over the Chicago Bears. That was the game the Giants resorted to the use of sneakers on an ice-covered Polo Grounds field to upset the previously unbeaten Bears for the title.

For almost 30 years, his 17-point performance stood as an NFL title game record. Strong could do everything – run, block, pass, catch passes, punt, placekick, and play defense with the very best.

An All-America at New York University, it was widely assumed that Strong would begin his career with the Giants. Instead, he opted in 1929 to sign a contract to play for the NFL’s Staten Island Stapletons.

However, after the 1932 season, the Stapes folded and Strong signed with the Giants. In both 1933 and 1934, Ken was a major factor in the Giants’ march to the NFL championship game. In 1936, after a salary dispute with team management, Strong jumped to the New York Yanks of the rival American Football League (AFL).

The AFL folded after two seasons and the Giants welcomed Strong back. Following the 1939 season, Ken announced his retirement. Prior to the 1944 season, the Giants, hard-pressed by wartime manpower shortages, convinced the versatile Strong to return as a kicking specialist.

"With the possible exception of Jim Thorpe, Ken Strong can do more things better than any back I ever saw."

All of that is good enough for me.