Share All sharing options for: Giants By The Numbers: 49 Is For ...

Now THIS is a number is New York Giants' history. We have had a few non-descript jersey numbers the past few days. Not the case today.

Today, though, we need to discuss what Tom Landry did as a Giant. And what could have been, or maybe should have been throughout the 1960s and '70s. If the Giants had had the foresight to elevate Landry to head coach rather than Allie Sherman, keeping him away from the Cowboys, the vast wasteland of those two Giants' decades may never have happened.

Landry played six years for the Giants as a defensive back and punter (and, no, until I looked it up I had no idea Landry punted) from 1950-55. He was All-Pro in 1954, and had 31 career interceptions as a Giant. As a punter? Not too shabby, with an average of 40.4 yards per punt.

All of that, though, is just the beginning of the story. 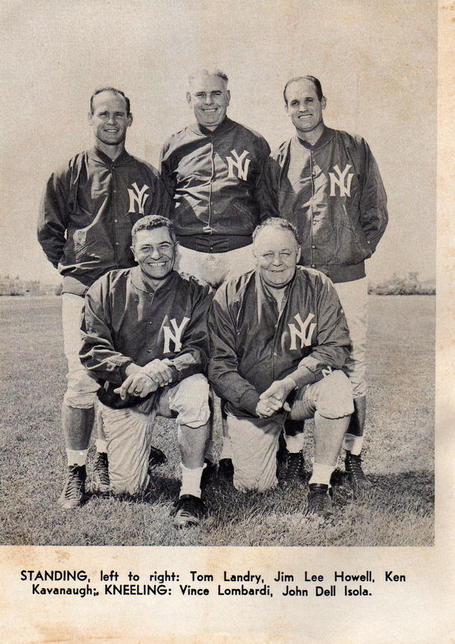 Landry's coaching was just as important -- if not more important 00 to the tremendous Giants' defenses of the '50s than his play on the field.

Landry doubled as the Giants' de facto defensive coordinator the last couple seasons of his playing career, and officially took over that job upon his retirement.

Landry, who made the 'flex" defense famous in Dallas, was also an innovative coordinator with the Giants. While running New York's defense Landry created the 4-3 defense, the base of which is still used today.

Here is Harland Svare, a linebacker on many of those Giants' teams of the '50s, talking about Landry's defense. The quote comes from Lew Freedman's 'New York Giants: The Complete Illustrated History.'

"Our defensive team was not the most talented in the league," Svare said. "But what set up apart is that we had a lot of intelligent guys on that team and operated a defense like nobody else had before."

We can only speculate on what might have been had Landry -- or offensive coordinator Vince Lombardi -- been named to the Giants' head coaching spot.

It is not speculation however, to say that Landry's presence had a great deal to do with the franchise's successes in the 1950s.