Share All sharing options for: Giants By The Numbers: 45 Is For ... 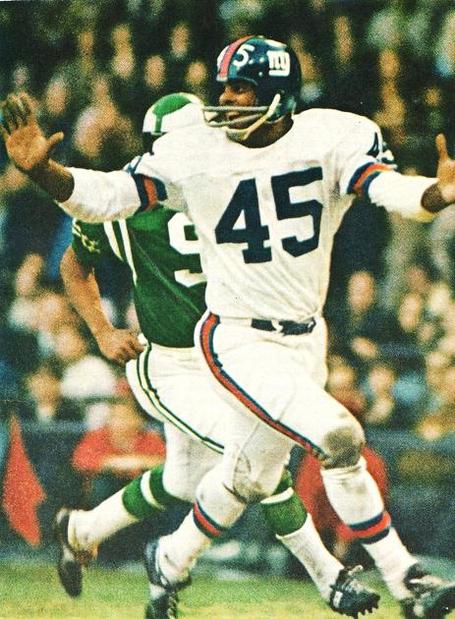 [NOTE: Looks like I goofed again. Apparently, the source I'm using is not as reliable as the Giants PR Dept. led me to believe. I will be cross-checking these in some other places going forward. Here is some info on Hall of Famer Emlen Tunnell, who should be the 45 on our list. ]

There really should not be much, if any, argument about this one. Jones was one of the most explosive wide receivers in New York Giants' history, and the last to make the Pro Bowl (1967 & 1968) prior to Steve Smith's selection last season.

Here is a section on Jones from the book I have been referencing quite often throughout this series, Lew Freedman's 'New York Giants: The Complete Illustrated History.'

The infatuation with fast runners brought Homer Jones onto the Giants' radar screen when the 6-foot-2 inch, 215-pound receiver was matriculating at Texas Southern. He ran the 100-yard dash in 9.3 seconds and the 220-yard in 20.5 seconds. New York liked those stopwatch readings. After some tutoring, Jones was ready for a full-time job in 1965 when he grabbed 26 passes. For the next four seasons he caught between 42 and 49 passes and distinguished himself as a game-breaker. In 1967, Jones averaged 24.7 yards a catch and scored 13 touchdowns, both marks leading the NFL, and he averaged a league-high 23.5 yards a catch the next season.

The speed Jones exhibited on the track was just as real on the football field. Quarterback Earl Morrall once explained that Jones could out-run a 70-yard pass he had thrown. "There is no way I can overthrow Homer," Morrall said. "I just throw the ball as far as I can and hope he'll have to go get it rather than wait up for it."

He played one season in Cleveland after leaving the Giants.

Other Notables Who Wore 45

Pete Athas was a cornerback and punt returner from 1971-74. I remember him as an athletic guy, if not a very good cornerback. Mostly, though, I remember the hair. 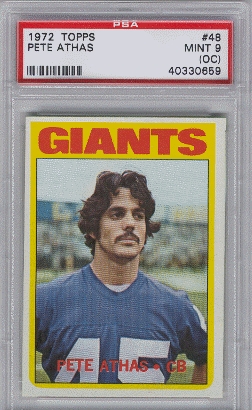 Leon Bright was a running back/kick returner from 1981-83. Giants' fans probably even thought Bright was good -- until David Meggett came along a few years later.