Share All sharing options for: A 44 Addendum ... Kyle Rote 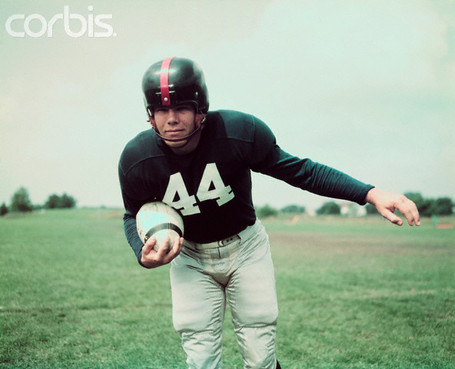 So, it has been pointed out to me that I have overlooked a great New York Giant in today's 'Giants By The Numbers' post.

A mea culpa. The main source I used did not have Kyle Rote listed among those who had worn 44 for the Giants -- which now makes me question just how good this source is.

A loved Maurice Carthon and Doug Kotar, but Rote really should be the 44 on our list.

Rote was the first overall pick by the Giants in the 1951 draft, and justified that selection by making four Pro Bowls during an 11-year career. He racked up 5,963 total yards for the Giants -- 4,797 receiving, 871 rushing and another 295 returning kickoffs. He scored 48 touchdowns in his career.

From Lew Freedman's wonderful and useful book 'New York Giants: The Complete Illustrated History,' here is a section on Rote.

Rote was a run, pass and catch all-around star for Southern Methodist, but early in his career he suffered a severe knee injury. That setback moved him to wide receiver for the Giants. Because the Giants had so many weapons, Rote was often overshadowed, but had a knack for making clutch plays. He caught his 20-or-so passes a season for years and then in the early 1960s Rote had years when he grabbed 42 and 53. Talk about patience.

Rote discussed how he made himself into a better receiver. "Playing basketball helps," he said. "As a pro you also have more opportunity to study films. You can improve on your ability to catch the ball, but there are some people who can never catch it. It's easier for a back to become an end than vice-versa."

Thanks to those of you who were so quick to point out this oversight today.