Share All sharing options for: Giants By The Numbers: 15 is for ... 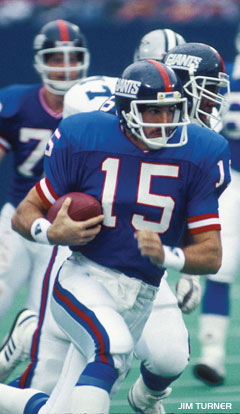 No way the Giants win Super Bowl XXV without the unlikely heroics of 'Hoss.

Hostetler, a reserve who had barely played since being drafted in the third round in 1984, took over when Phil Simms broke his foot Dec. 15, 1990 in a regular-season game against Buffalo. The Giants went on to win five straight games, including the thrilling 20-19 Super Bowl victory over Buffalo -- the Scott Norwood "wide right" game.

As this 2004 story on Giants.com noted, that one stretch alone was enough to make Hostetler a historic figure in Giants' lore.

Hostetler was an average starter for the Giants for two seasons following his Super Bowl heroics. Then moved on to finish his career in Oakland and Washington, never duplicating the magical run he had replacing Simms.

That one stretch, however, earns him this honor.

The only other truly notable player who wore 15 for the Giants was Craig Morton, who came from Dallas via trade in 1974 and stayed with the team through 1976.