Share All sharing options for: Giants By The Numbers: 13 is for ... 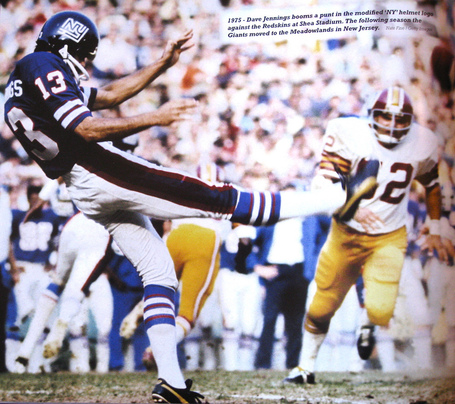 No? I didn't think you wanted to do that.

The fact that we are talking about Jennings, though, leads to a different argument. Who is the greatest punter in Giants' history? Is it Jennings? The recently-retired Jeff Feagles? Maybe it's Sean Landeta? Maybe you want to really turn back the clock. If so, can you make an argument for Don Chandler, who punted for the Giants from 1956-64?

Follow the jump to see the case for each of the four punters. Vote in the poll below and let us know who you would choose.

Jennings spent the first 11 of his 14 seasons with the Giants, then crossed over and finished his career with the Jets. As a Giant Jennings was named to four Pro Bowls and twice voted All-Pro. He averaged 41.2 yards per punt as a Giant, with a career-best of 44.8 in 1980.

What can we say about Feagles, who has been discussed a lot here recently in the wake of last week's retirement. He was a Giant for the final seven of his 22 NFL seasons, and averaged 41.2 yards per punt with one Pro Bowl appearance.

That doesn't tell the real story of Feagles' value, however. He was the ultimate directional kicker with a record 531 career punts inside the 20. Landeta is a distant second with 381. He ended his career with a net average of 36 yards per punt.

Landeta barely defeated Feagles when we voted on a punter for our All-Time Team back in 2008. BBV has grown by leaps and bounds since then, however, and I am curious to see how the vote plays out this time.

Like Feagles, Landeta had a 22-year career. Unlike Feagles, though, he began his career with the Giants. His first nine NFL seasons were in New York, and he was a two-time Pro Bowler and three-time All-Pro as a Giant. For a couple of years Landeta may have been the game's premier punter. He averaged 43.4 yards per punt from 1985 until he was released midway through the 1993 season.

Also unlike Feagles, Landeta was not a directional punter. He was a 'hit it as far as I possibly can' guy.

Averaged 43.5 yards per punt with the Giants from 1956-64. That is pretty impressive considering there were no special 'K Balls,' and not that much emphasis placed on practicing the kicking game in those days. My guess is Chandler gets little to no support here, however.