Share All sharing options for: Giants By The Numbers: 11 is for ... 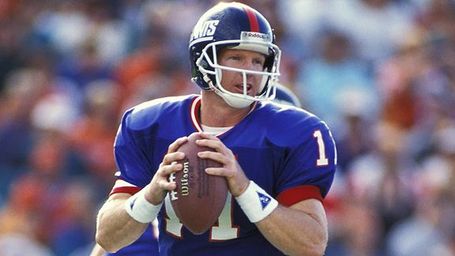 Can there be any doubt whatsoever about this one?

In the New York Giants' universe, 11 is for Phil Simms. Plain and simple. End of conversation. No debate, and no polling necessary.

Eli Manning may someday ascend to the throne as greatest Giants' quarterback of all time. Right now, however, that crown belongs to Simms. The number 11 is retired in his honor, and justifiably so.

Simms was a Giant from 1979-1993. May it always be a blight upon Bill Parcells that, at one point, Parcells actually thought Scott Brunner deserved the starting job instead of Simms.

The Simms bio on the Giants.com historical page, lists his accomplishments quickly.

Owns 19 team records for the Giants, including all-time records with 2,576 completions in 4,647 attempts for 33,462 yards…Owns a .597 winning percentage (95-64, including 6-4 in postseason play) as a starter over his 15-year career…Named MVP of the Super Bowl after leading the Giants to a 39-20 victory over Denver in Super Bowl XXI.

That gives you the information in a nutshell, but it doesn't do Simms justice at all.

I will never forget that 1987 Super Bowl watching Simms carve up the Broncos with a 22-of-25 effort that led Parcells to say "This might be the best game a quarterback has ever played."

Throughout the course of his career Simms was never considered the best quarterback in the league. My memories of Simms are of an incredibly tough player, a winner, a guy who could make plays that had to be made despite the fact that Parcells and the Giants never surrounded him with great weapons to throw to.

We will never know what Simms could have done with Joe Montana's weapons. Or, for that matter, with the ones Eli currently has to work with.

He did enough, though, to always be remembered as a great Giant.