Share All sharing options for: Giants By The Numbers: 10 is for ...

Finally. A uniform number with a little juice. And one worthy of a little debate over who is actually the best New York Giant who has ever won it.

I am going to let you guys decide this one. I will, however, make the case for each player. Follow the jump for that.

To voice your opinion vote in the poll and let us know who you think is the most memorable No. 10 in the history of the franchise.

The case for Eli

He is a Super Bowl winning, franchise quarterback in the prime years of his career. And it looks like he is still getting better. Eli set career highs in passing yards (4,021), completion percentage (62.3) and quarterback rating (93.1) in 2009.

Phil Simms is commonly considered the best quarterback in Giants' franchise history. Eli, however, appears well on his way to eclipsing Simms at the top of that list. 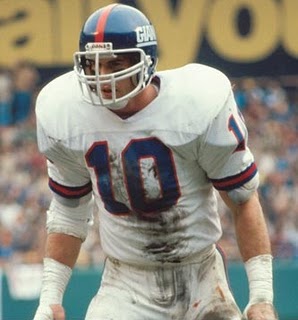 The case for Van Pelt

Van Pelt had the misfortune of being the best player during a horrible period of Giants' football. He was with the team from 1973-83, and made five Pro Bowl appearances during that time. Until Lawrence Taylor came along, Van Pelt might have been the best outside linebacker in Giants' history. The Giants only had one winning season while Van Pelt was with the team -- Taylor's rookie year of 1981.

Van Pelt wore No. 10 in college and then with the Giants, although that was not a number linebackers were supposed to wear.

"They were supposed to give me a number in the 50s or 90s," he said. But I was also a backup kicker in college, which I also was my rookie year with the Giants.

"They said, 'the league might give us a problem, but we'll give it to you as a kicker that happens to play linebacker.' It helped my career. I started to get to be a better linebacker and I started getting noticed a little more with that number. They couldn't forget it. 'Ten' just doesn't belong out there on defense. It was a lucky number for me."

Is he the best 10 in Giants' history? That is up to you to decide. 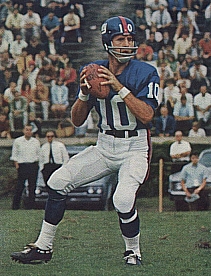 The case for Tarkenton

Well, first and foremost he is the only Hall of Famer in the group. Tarkenton made the Pro Bowl four straight seasons with the Giants, from 1967-70.

The first problem with Tarkenton's candidacy here is that he played just five of his 18 professional seasons in New York. And the Giants had a winning record just once in those years.

Tarkenton is better known for his 13 seasons in Minnesota, where he did lots of great things despite losing four Super Bowls. His 47,003 passing yards is still sixth on the all-time list, and he is eighth in passes completed.

We won't even talk about 'infomercial Fran.'

A note about the number 10

I had forgotten until I saw it in a release from the Giants the other day, but just-retired punter Jeff Feagles had the number when Manning came to the Giants. To get the number from Feagles, Eli ended up footing the bill for a Florida vacation for Feagles and his family.