Share All sharing options for: Giants By The Numbers: 32 Is For ... 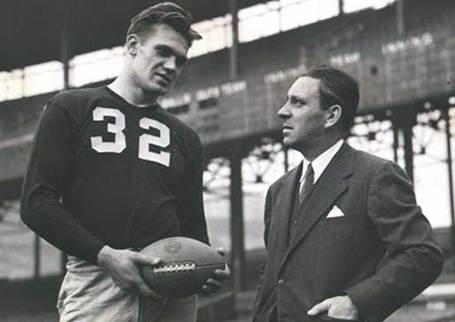 Six-foot-six Al Blozis (#32), Georgetown's greatest athlete, seen here with
Georgetown coach and former New York Giant halfback Jack Hagerty at New
York's Polo Grounds, 1941. Four years later, the New York Giants gathered
at the Polo Grounds to unveil a plaque in his honor. Blozis was killed in Feb.
1945 in the service of his country during World War II. A member of the
NFL's All-Decade team after just two years of play, his jersey is one of only
eleven ever retired by the Giants.

When it comes to Blozis, the photo caption above, taken directly from the photo itself, pretty much says it all.

Blozis played for the Giants from 1942-44. Here is his Giants.com bio.

Made an immediate impression on the Giants after arriving in 1942 and quickly earned a starting assignment at tackle…Played in the 1944 championship game with the Giants, he then was sent almost immediately overseas where as a lieutenant in the army he was killed in action in France a brief six weeks later.

With Memorial Day being Monday it is actually a good time to remember Blozis and Jack Lummus, the only two Giants killed while serving their country.