Share All sharing options for: Giants By The Numbers: 31 Is For ...

Ah, what could have -- and should have -- been with the terrifically talented Jason Sehorn.

In case you don't remember, Sehorn is possibly the most athletically gifted cornerback to ever play for the New York Giants. He made some of the most amazing athletic plays I have ever seen from a cornerback, and appeared headed for a career as an all-time great Giant.

Until he and head coach Jim Fassel made the boneheaded decision to use Sehorn's speed and athleticism as a kickoff returner.

That led to Aug. 23, 1998, an exhbition game against the New York Jets. That's when Sehorn took a kickoff, headed up the middle of the field and tore both the anterior cruciate and medial collateral ligaments in his knee.

Sehorn missed the entire season. He returned for the 1999 season, but was never the same player. He led the Giants in interceptions in 1996 (five) and 1997 (six), but had just eight the rest of his career. His ability to run and jump with any receiver in the league, including a young Randy Moss, vanished with one hit.

The Giants finally released him after the 2002 season, and he played one season with St. Louis. He failed a 2004 physical and his career was over.

Here is part of a great tribute to Sehorn written by Andy Furman of UltimateNYG on the 10th anniversary of the injury.

Sehorn was a freak. He had a Pro Bowl year in 1997 in everything but name, and would certainly have been IN MANY if not for the injury. In 1997, Sehorn started all 16 games. He had six interceptions, plus 86 total tackles and 20 passes defensed. He was twice named NFC Defensive Player of the Week and December's NFC Defensive Player of the Month as he helped lead the Giants to the NFC East championship.

With Strahan and Armstead entering their primes RIGHT ALONG SIDE OF SEHORN, this defense had the makings of total domination. Everyone remembers the special INT of McNabb that Sehorn had in the 2000 playoffs. He might have had 5 (OR MORE, trust me) of those types of special impact plays in his career if he never lost the step he lost on that fateful day in August. The havoc this player wreaked in 1997 was something special. Of all the players Wellington Mara has watched in practice, Sehorn was his favorite. Remarkable statement for a man who saw football pretty much from the beginnings of the (pro) game.

"When he was in his prime," Mara said, "he was as good as I ever saw playing his position. I used to watch him in practice, so athletic and it came so easily to him, and yet he applied himself 100 percent. It was great to watch."

Oh the plays he made! He'd be a shutdown corner with Strahan shutting down the other side of the field... like a vise. Or Sehorn would simply take on the opposing offense's best passing threat and simply shut him down. Sparks was solid on the other side, and of course the middle had Hammer and Armstead. Chad Bratzke used those players to catapult himself to a great contract with the Colts. And then there were the Sehorn corner blitzes. Opposing offenses simply gave up on Sehorn's side of the field the way they did vs Deion Sanders, so then John Fox would send Sehorn in on CB blitzes and the QB would never see it! Corner blitzes cannot be executed by ordinary corners. You need that special blend of speed and agility to get there quickly AND not miss. Sehorn also had ~20 lbs. on Sanders and could play the run MUCH BETTER THAN SANDERS EVER DID. 4.3 speed, the total package.

"Jason was shutting people down," says Johnnie Lynn, coach of the Giants' defensive backs. "He had such confidence that year. He was competitive on every down, and he never wanted to leave the field. He was what you dream about for all your corners: the big size, the big arms, the ability to run and to hit. You knew, as his reputation grew, he'd become a Pro Bowl player year after year." 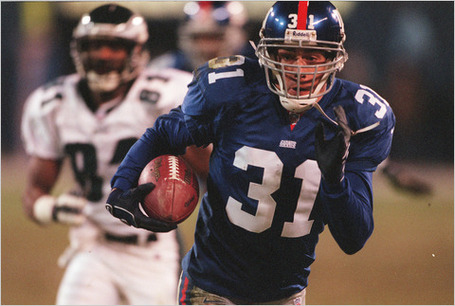 In the end, we are left with a few great Sehorn moments. And the knowledge that we should have had many, many more.