Share All sharing options for: Giants By The Numbers: 30 Is For ... 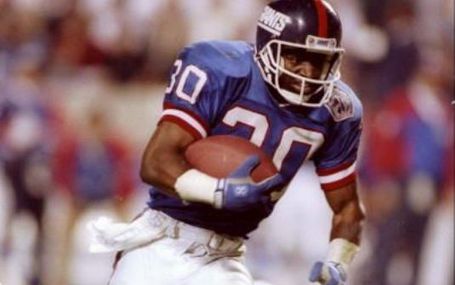 The 5-foot-7, 190-pound Meggett was undoubtedly one of the best all-purpose offensive players in Giants' franchise history. As a running back, receiving threat, punt and kick off returner Meggett proved to be an extraordinary weapon for the offensively conservative Giants from 1989-94.

He amassed 8,641 all-purpose yards as a Giant. He is the Giants' all-time leader in punt-return yardage with 2,230, and his six career touchdowns on kick returns is the most in franchise history.

Meggett played four more seasons after leaving the Giants -- with New England and the Jets -- and ended his career with 13,996 all-purpose yards.

When Meggett left the Giants as a free agent to follow Bill Parcells to New England, the New York Times called him "the Giants' best special teams player ever and in many ways its heart and soul."

It was fitting that Meggett followed Parcells to New England. When Meggett was drafted in the 5th round in 1989 it was over Parcells' objections. He did not want the smallish running since he already had Joe Morris. Eventually, though, Meggett won Parcells over and became a key player for him.

I have to give some props to two other outstanding running backs who have worn the number 30 for the Giants.

Charles Way was part of a dying breed, one of the last NFL fullbacks to be used a primary ball carrier. Way's career was cut short by a chronic knee injury. His best season was 1997, when he gained 698 yards and averaged 4.6 yards per carry.