Share All sharing options for: Giants By The Numbers: 29 Is For ... 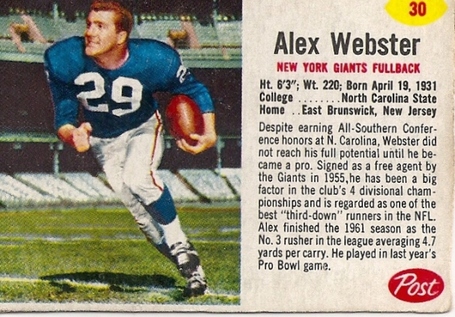 Played 10 productive seasons with the Giants as a 6-foot-3, 220-pound fullback. From Wikepedia, here is a career summary.

Webster was part of the Giants' 1956 NFL championship squad.

We also know that Webster was head coach of the Giants during some of their dark seasons, a role for which he was probably not well-suited. His five-year coaching record from 1969-73 was 29 wins, 40 losses and one tie. Webster was UPI Coach of the Year in 1970 when the Giants went 9-5.

From Lew Freedman's fabulous book 'New York Giants: The Complete Illustrated History,' here is part of an excerpt about Webster.

"Webster was never a speedster, but he made clutch plays. He was the cavalry who came to the rescue when the Giants needed it. ...

A writer for Pro Football Weekly once called Webster "the world's slowest fullback, but best cutter who would always get the hard yard. ...

Webster will always be remembered by Giants' faithful as the man the team and quarterback Charlie Conerly turned to on handoffs when New York was in a third-down and two-yards-to-go scenario. The short yardage plays were not flashy, but they were critical."