Share All sharing options for: Giants By the Numbers: 27 is for ... 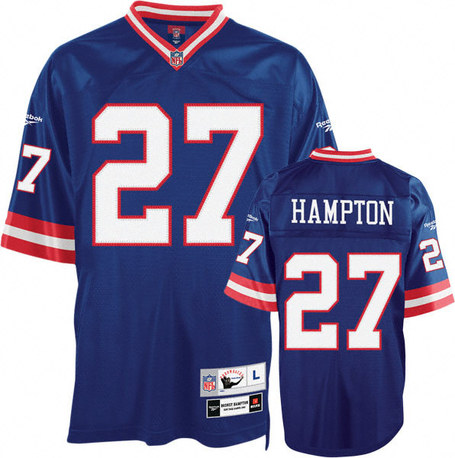 Sorry, Brandon Jacobs, but this one is a no-brainer.

Hampton, the 1990 first-round pick, is the second-leading rusher in franchise history behind only Tiki Barber with 6,897 yards. He is a two-time Pro Bowler and had five consecutive 1,000-yard seasons from 1991-95.

In five NFL seasons Jacobs has half Hampton's yardage (3,455 yards) and I seriously doubt he will have the longevity as a top-flight back to reach that total.

In a story about Hampton a couple of years ago, Michael Eisen of Giants.com called him "one of the most unassuming stars the Giants ever had."

Barber, who succeeded Hampton and wound up smashing his then-franchise rushing record, was a breakaway-type back.

Hampton was more in the mold of many other top Giants backs of recent vintage. Ottis Anderson, Rob Carpenter and, yes, Jacobs as well. At 5-foot-11, 221 pounds he was more power than speed. More bull-rusher, get the first down, keep grinding out a few valuable yards at a time than he was big-play guy. He had one run (a 63-yarder) longer than 50 yards in his career, and his longest run in his final five seasons was 32 yards.

The only other truly notable 27 in Giants' history is Ron Dayne -- and considering the comparison to Hampton and Jacobs you have to consider Dayne a disgrace to the number.

The Heisman Trophy winner was drafted in the first round by the Giants in 2000, and had four non-descript seasons in New York He was supposed to be the 'Thunder' to Barber's "Lightning," but Dayne's running style turned out to be more "tip-toe through the tulips." He saw decreasing action in each of his four seasons in New York.