Share All sharing options for: Giants By The Numbers: 26 is for ... 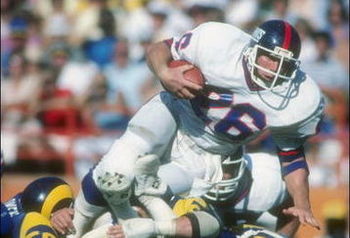 With no running game to speak of, the Giants traded a draft pick to the Houston Oilers early in the 1981 season for the 6-foot-1, 224-pound Carpenter. It proved to be a stroke of brilliance that helped propel the Giants to a 9-7 season and their first playoff appearance since 1963. Of course, it was also the year the Giants drafted some linebacker named Lawrence Taylor.

Carpenter remained the Giants' feature back through the 1984 season. That year he gained 795 yards, but in 1985 lost that job to Joe Morris. He played a few games with the Rams in 1986, then was out of the league.

When I think of Carpenter I think of a guy who was a pure football player. Not fast. Definitely not shifty. Not real big or powerful. His best yards-per-carry average with the Giants was 1981's 3.9. Carpenter, though, always seemed to make a couple of yards when they were needed or catch a pass to help a drive. Carpenter caught 20 or more passes four of his five seasons with the Giants.

He was, to the Giants of the early 1980s, what Ottis Anderson turned out to be in the latter part of the decade. A dependable veteran back whose toughness embodied the physical style the Giants would become known for.

Other Notables who wore 26